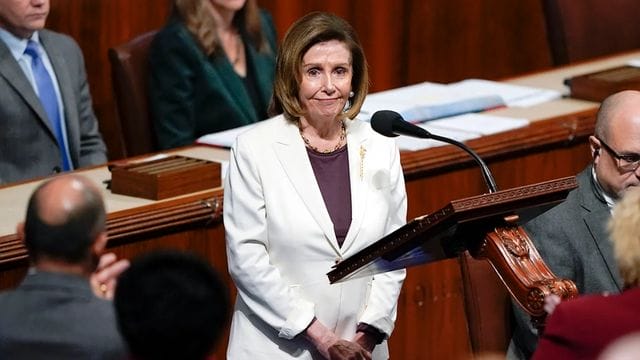 Pelosi praised Presidents Bush, Obama, and Biden, but she didn’t say a word about Trump. In her last speech to Congress on Thursday, House Speaker Nancy Pelosi did not mention former President Donald Trump.

She talked about how proud she was to have worked with Presidents George W. Bush, Barack Obama, and Joe Biden, but she didn’t say a word about Trump. In a speech on the House floor on Thursday, Pelosi said that she plans to stay in Congress but will no longer try to lead the Democratic caucus.

“I’ve enjoyed working with three presidents. With President George Bush, we made historic investments in clean energy. With President Barack Obama, we changed the way health care works. And with President Joe Biden, we shaped the future, from infrastructure to health care to climate action,” Pelosi said.

She also said, “Now we must move boldly into the future based on the same principles that got us this far.”

Soon after Pelosi spoke, Biden made a statement in which he praised her. He may have also called Pelosi on Thursday morning to congratulate her.

Biden wrote, “When I think of Nancy Pelosi, I think of dignity.” “She will go down in history as the most important Speaker of the House of Representatives ever.”

“She is a great example of how elected officials have to keep their oaths to God and country to make sure our democracy works and stays a shining example to the rest of the world. In everything she does, she shows the same dignity she sees in the lives of the people of this country “he added.

The California representative who made history as the first woman to lead a major party in either chamber of Congress has announced that she will not be leaving the House entirely.