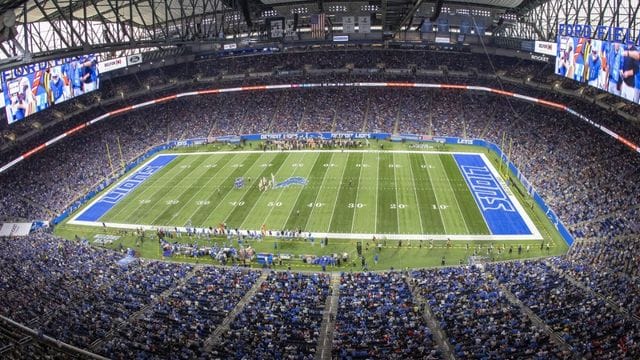 Due to a winter storm with lake effect snow forecast to impact western New York over the next few days, the Buffalo Bills’ home game versus the Cleveland Browns has been moved to Detroit.

The game is still set for 1 p.m. ET on Sunday. From Thursday night to Saturday night, the Buffalo area is predicted to receive up to five feet of snow, along with thunder and other bad weather.

The decision to relocate the game at Highmark Stadium was made “in consultation with the Buffalo Bills and local and state authorities as the region prepares for the storm,” according to the franchise. The final decision was made by the league office, although all parties involved were kept informed.

Wind gusts are also anticipated to complicate traffic. It is not forecast to snow during the time the game is scheduled to take place.

“Everything about the decision to move the game to Detroit has to do with safety,” Bills executive vice president and chief operating officer Ron Raccuia said. “We’ve really been preaching about safety first here for the last 48 to 72 hours.”

The game was not moved until Thursday afternoon, with the Bills exercising outside in preparation for the contest. On Wednesday, the squad practiced in their indoor fieldhouse.

The Bills intend to maintain as normal a timetable as feasible for an away game. According to general manager Brandon Beane, they plan to practice Friday “if possible” and fly to Detroit on Saturday. They expect to travel back Sunday after the game, weather permitting, and have a short practice week before returning to Detroit to play the Lions on Thanksgiving.

“Coach Sean McDermott does an excellent job of messaging and ensuring our guys understand it’s still a football game,” Beane added. “Everything else remains constant. It’s a quick flight. We’ll try to keep it as routine as possible. Is it a little annoyance? Yes. But I believe our players are professionals. They are aware of it.”

The squad intends to use the visitors’ side of everything in Ford Field in order to have the same experience when they return for the game four days later. 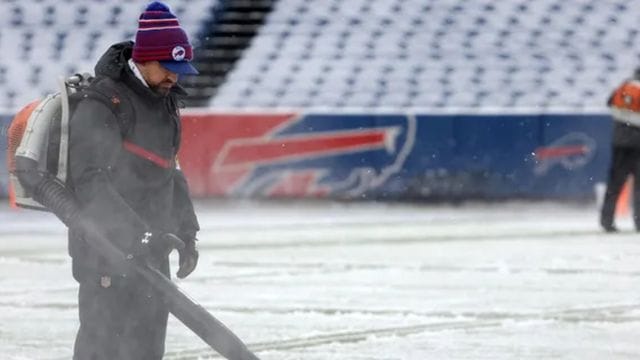 The move has nothing to do with the Bills’ stadium being an outdoor venue without a dome, according to League spokesperson Brian McCarthy, and the priority is that resources are not diverted from the community.

The decision was made in part to ensure that resources were available for other community needs as well as the safety of persons in the neighborhood and fans. In 2017, the team played a significant snow game in Orchard Park, and the Bills won 13-7 in overtime.

Due to a snowfall in November 2014, Buffalo’s home game against the New York Jets was shifted to Ford Field. That game was won by the Bills 38-3. That game was moved from Sunday to Monday, but the Bills’ Thanksgiving matchup in Detroit makes the scheduling less flexible this year.

Because the Browns-Bills game has been shifted from Buffalo to Detroit, all previous bets on the matchup are void, according to Caesars Sportsbook’s house rules.

The total, which dropped from 47.5 to 42 (it had risen to 43 when the bets were rejected) before the site change, drew a lot of attention all week. Except for Thursday night’s game between the Tennessee Titans and Green Bay Packers, the Browns-Bills under-received the most bets to cover the spread. Totals are rarely more popular than point spreads.

With the game now in Detroit, Caesars Sportsbook has Buffalo as a 7.5-point favorite, with the total set at 48.

Those who purchased tickets to the game in Orchard Park will be reimbursed. Bills season ticket holders and fans will have early access to new presale tickets for the game in Detroit, which will go on sale at 2 p.m. ET Friday at a lower price than regular game tickets.

“We’re aiming to keep this as a home-field advantage,” Beane added. “Fortunately, it is not across the country. We know Bills Mafia is all over, and we hope those in the Michigan region will surely come, as well as those here who want to get out of the weather.”

Buffalo is also dealing with a number of ailments on the roster. With illnesses, three players missed Thursday’s practice: defensive back Cam Lewis, wide receiver Isaiah McKenzie, and defensive tackle Jordan Phillips. Beane verified that the players are suffering from an illness other than COVID-19 and will be available for the journey to Detroit.

With the loss of this week’s home game, the Bills will not return to Orchard Park until December 11 against the Jets.