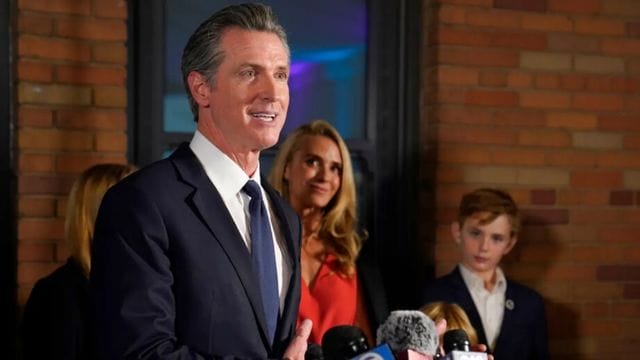 Despite rumours that he might run against President Biden for the Democratic nomination in 2024, California Gov. Gavin Newsom says he is “all in” on Biden’s re-election.

In an interview with Politico, Newsom tried to put an end to rumours that he might run for the Democratic nomination. The outlet said that the White House was “considerably” annoyed by rumours that he was planning a run to get rid of Biden.

“I’ve told everyone in the White House, from the chief of staff to the first lady,” he said, adding that his message to Biden’s re-election campaign is “I’m all in, count me in.”

In the past few months, there has been more talk about Newsom running for president in 2024. This is because Democrats are getting more worried about Biden’s health, age, and low approval ratings.

Some Democrats started looking for a possible replacement for Biden because they were worried about how he would do in a race against former President Donald Trump or Florida Gov. Ron DeSantis in 2024. Newsom’s name had been brought up as a possible candidate.

That apprehension has likely diminished somewhat following Democrats’ stronger-than-expected showing in the November midterm elections, where Democratic worries of a Republican “red wave” did not materialise.

During a post-election press conference, Biden stated that he intends to run for re-election and will make a definitive decision by early next year.

Biden said, “I think everyone wants me to run, but we’re going to talk about it.” “I hope Jill and I can get away for a week between Thanksgiving and Christmas. I don’t think we’ll know for sure until early next year, though.”

Newsom had also made people think he might run by attacking DeSantis and Texas Gov. Greg Abbott in public many times. But the governor, who easily won re-election in blue California, is said to have gotten out of his car on Election Night near a Sacramento hotel and called Biden to show his support for his re-election bid.

Newsom said, “I’m all in; put me in, coach.” “We’re on your side,” Politico says that Newsom did not want the reporter to hear the conversation, but it just so happened that he was leaving the same hotel when he took the call.

According to the site, a Trump comeback has become the party’s primary priority, which is why Biden has been granted so much flexibility by his party during a difficult 2022 campaign. And now, one of his most serious possible primary opponents has endorsed Biden 2024, especially highlighting his record of opposing the former president.

“He not only defeated Trump once, but I believe he can defeat him again,” Newsom said. “I hope he runs; I’ll be there to cheer him on.”