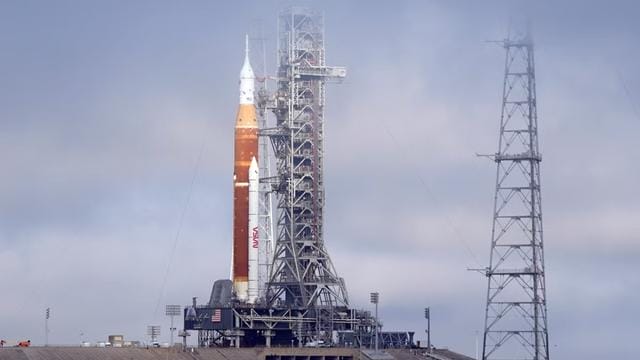 NASA’s new $4 billion moon rocket rode out Hurricane Nicole on its Florida launchpad early Thursday, seemingly with very little damage, according to an early NASA survey in the storm’s wake.

Winds of up to 100 mph were registered by launch-site sensors hundreds of feet above the ground, pushing the design limitations of the 32-story-tall rocket and offering further hazards to a spaceship already plagued by technical difficulties that have delayed its first launch.

The US National Weather Service makes NASA’s wind sensor information available to the public online. Before the storm, US space agency officials stated that the rocket is intended to tolerate exposure on the launchpad to winds of up to 85 mph.

Nicole’s greatest sustained wind speeds on the ground were 75 mph, with greater gusts, as it made landfall before dawn on Thursday south of the Kennedy Space Center launch site in Cape Canaveral, according to the National Hurricane Center in Miami.

Rather than attempting to roll the mammoth Space Launch System (SLS) rocket back to its hangar before the hurricane hit, NASA chose to batten down the spacecraft at the launchpad, where it arrived last week prior to Nicole becoming a tropical storm.

Following two botched countdowns in late summer, the SLS and its Orion capsule were preparing for a third launch attempt, which would represent their highly anticipated first flight and the inaugural mission of NASA’s Artemis lunar exploration program.

NASA engineers reasoned that attempting to transfer the big rocket in severe winds as the storm approached was too dangerous.

“Camera checks reveal relatively small issues like as loose caulk and tears in weather covers,” said Free, who manages most of the agency’s Artemis program. “The crew will soon perform additional onsite walk-down examinations of the vehicle.”

Last Thursday, NASA wheeled out SLS to its launchpad for a planned November 14 liftoff, with the goal of conducting a much-delayed first test journey toward the moon without any humans aboard.

“Even at that point, there was always a fear that somewhere out in the Caribbean would be a favored area for at least some development of a tropical cyclone,” said Mark Burger, launch weather officer of the 45th Weather Squadron at Cape Canaveral Space Force Station.

“Of course, nothing was available at the time,” he added, “so you can only go with the probabilistic aspect.”

Nicole formed into a possible tropical storm when SLS approached the pad, almost 4 miles from where it had been kept inside NASA’s Vehicle Assembly Building. When weather forecasters anticipated Nicole would intensify into a hurricane, NASA postponed the rocket’s planned launch date to Nov. 16.

On Thursday, a NASA official stated that the agency has not ruled out a November 16 launch, but added, “It is premature to finalize the launch date as we have only just begun to get stuff out for walk-down inspections.”