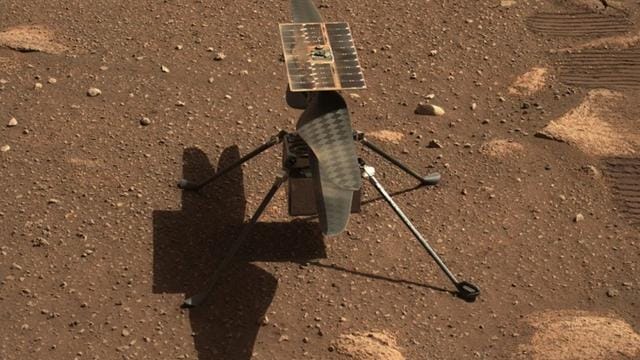 NASA’s tiny Mars helicopter, Ingenuity, is preparing for another mission on the Red Planet, Flight 34. The upcoming trip, scheduled for Thursday, November 10, will be a short test flight in which the tiny rotorcraft will hover for less than 20 seconds at around 16 feet (5 meters), according to the Jet Propulsion Laboratory, which administers the project for NASA.

On September 24, 2022, during the penultimate aerial commute, Flight 33, a tiny bit of foreign object debris (FOD) ended up on the little rotorcraft’s foot, which was captured by the navigation camera (Navcam) onboard the helicopter. Fortunately, it fell off and had no effect on the flight.

Ingenuity was launched by NASA on the Perseverance rover in July 2020 and landed in Mars’ Jezero Crater on February 18, 2021. The tiny rotorcraft have survived on Mars for more than a year longer than their original expected lifespan.

It’s time for another #MarsHelicopter flight!
Ingenuity is preparing for Flight 34, which is expected to happen no earlier than Nov. 10. The rotorcraft will do a short test flight, hovering for less than 20 seconds at about 16 feet (5 meters). https://t.co/9aUyuvHEZS pic.twitter.com/deZZC0Ejjq

NASA’s Curiosity Rover recently completed its long-awaited voyage to the salty zone of Mount Sharp. NASA suspects this region is mineral-rich, referring to it as a “sulfate-bearing unit.”

According to a NASA blog, scientists believe this region was formerly home to streams and ponds on Mars that dried up and left minerals behind billions of years ago. If this notion is proven right, it could provide a fascinating insight into Mars’ transformation from Earth-like circumstances to the barren sandy terrain it is now.

Although the rover just completed a long journey through the hazardous terrain of the Paraitepuy Pass surrounded by mountain ranges, this discovery was made with the help of the Mars Reconnaissance Orbiter more than a decade ago.

Since arriving at its destination, the rover has uncovered a variety of rocks and even evidence of water, as well as minerals such as magnesium sulfate, calcium sulfate, and sodium chloride.

According to NASA, the Curiosity Rover uses its Mast Camera, or MastCam for short, to take color photographs and video footage of Mars’ sandy landscape. The photos are then stitched together to generate panoramas of the rover’s surroundings.

“One of the two MastCam camera systems has a moderate-resolution lens, similar to the PanCam on the Mars Exploration Rovers,” according to NASA. The other camera system has a high-resolution lens for studying the scene from a distance away from the rover.”