NASA Approves the Psyche Mission to Investigate the Core of an Ancient Planet!

NASA has approved a mission to investigate the metal-heavy asteroid Psyche, which may be the exposed core of a long-dead planet. The mission’s survival had previously been called into question due to technical issues that forced it to miss its 2022 launch window.

Annibale de Gasparis, an Italian astronomer, discovered a roaming heavenly body traversing the night sky in 1852 and named it Psyche after the Greek goddess of the soul.

Later telescope observations revealed that Psyche was a 140-mile (226 km) wide asteroid with a high metal content that orbited in the main asteroid belt between Mars and Jupiter.

Psyche’s metal-heavy composition, which accounts for 30-60% of its total mass, distinguishes it from the other million-plus asteroids known to roam our solar system. Many astronomers believe the strange body is the exposed nickel-iron core of an ancient primordial planet, the outer layers of which were blasted away during a series of ancient collisions with other young planetoids.

If this is the case, Psyche would represent a once-in-a-lifetime opportunity to investigate the core of a world born in the chaotic environment that was thought to exist billions of years ago in the space around our young star.

Direct observations of a planet’s core would normally be impossible. The metal-dominated heart of Earth, for example, is locked away 3,000 km (1,800 miles) below the surface in a phenomenally high-pressure environment with temperatures around 5,000°C (9,000°F). These are not ideal circumstances for scientific research.

Psyche’s exposed core appears almost too good to be true, despite the fact that it is orbiting the Sun in the hostile environment of interplanetary space. Astronomers could gain insights into the formation of the solar system’s mighty planets, including Earth and the plethora of distant exoplanets discovered to date, by observing the planetary remnant. 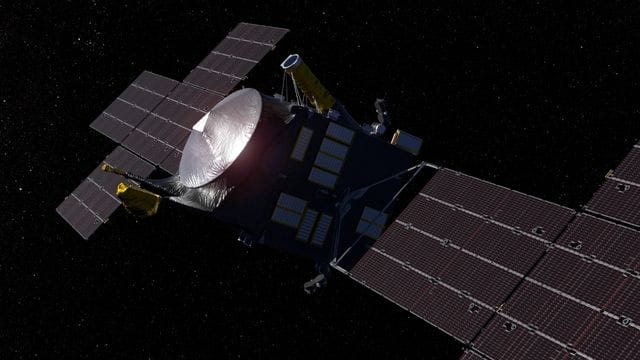 NASA announced in 2017 that it would send an unmanned probe to rendezvous with and explore the alien world. The spacecraft will be powered by two solar panels, which will give the probe an impressive 81-foot wingspan (25 meters).

Along with powering the probe’s scientific instruments, the electricity generated by the panels will be used to convert xenon gas into xenon ions, which will then be fired out the back of the spacecraft to provide thrust. The Psyche mission is currently undergoing rigorous testing in preparation for its eventual launch atop a SpaceX Falcon Heavy rocket.

However, the road to launch has not been easy. Psyche’s initial 2022 launch date was pushed back due to a series of technical issues, including problems with the probe’s flight control software. These issues were so serious that an internal review, as well as an independent probe, were established to investigate the technical issues surrounding the mission and determine whether it was still viable.

The independent review’s findings are still being finalized and will be made public at a later date.

However, on Oct. 10, NASA announced that the mission would not be scrapped and that the agency instead planned to launch the robotic spacecraft as early as Oct. 10 of next year. The mission has a total lifetime budget of $985 million US dollars, more than $717 million of which has already been spent.

If all goes well during the October 2023 launch, the lonely probe will travel through interplanetary space for about three years before radically altering its trajectory in 2026 thanks to the gravity of Mars. If all goes well, mission controllers anticipate the probe will arrive at the asteroid Psyche in August 2029.

“I commend the independent review board and the JPL-led team for their dedication to mission success,” said Thomas Zurbuchen, Associate Administrator of NASA’s Science Mission Directorate in Washington. “Psyche’s lessons will be implemented across our entire mission portfolio.”

“I am excited about the scientific insights Psyche will provide during its lifetime, as well as its promise to contribute to our understanding of the core of our own planet.”

The Free PS Plus Games for the Month of November 2022 Are a Wonderful Appetiser!