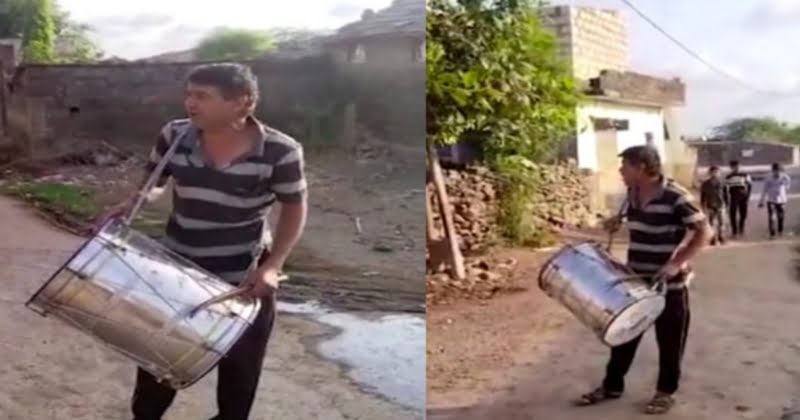 Liquor has been banned in Gujarat. Yet youth are getting intoxicated by many attempts. And liquor is being sold in many places in Gujarat, due to which the sarpanch has taken a strong stand to ban alcohol in his village. The sarpanch announced a ban on alcohol by playing drums in the entire village. The video is going viral on social media and the sarpanch is being praised everywhere. After taking information about the entire video, it was found that this video is from Paswara village of Bhesan taluka of Junagadh district. It is seen in this video that Dholi is speaking, listen and hear, from today onwards the sarpanch has ordered that no one should drink alcohol in the whole village.

While talking to the media, village sarpanch Jairaj Singh said that alcohol addiction was rampant in the village, due to which the people around the village called it Mini Diu. The youth started dying due to drugs at an early age and their family members became very angry and upset due to which the rate of education is also falling now so the announcement made by the sarpanch in the village has not been made public. Then the sarpanch says that due to being the last village of the Gir forest, this village does not get the attention of the government. The village is only 30 km away from Junagadh in which 500 people come and live and most of the people depend on agriculture for their livelihood. Talking to local people found that fifteen to 22 women became widows in a short time, mainly due to excessive drinking by their husbands.

After talking to the people, it came to know that a lot of liquor was being sold here and most of the people were drunk and there was no peace in the village. People liked and appreciated the decision taken by the people. Jairaj Singh, the sarpanch of the village, comes from the poor class and has himself studied till class three. And runs a milk dairy himself. And from time to time he makes great efforts to wake up the people and is the first to run in case of any trouble in the village. And everyone is at the forefront of the ministry, considering everyone as his brother and sister.