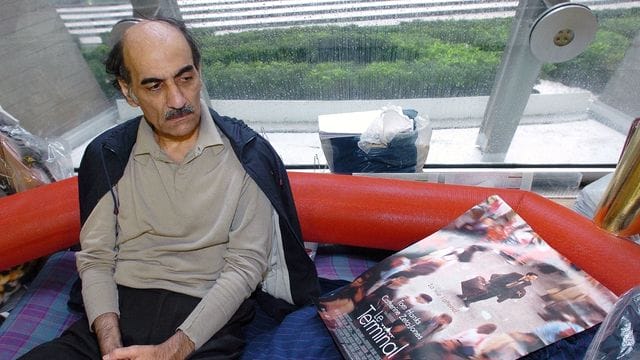 An Iranian man who lived for 18 years at Paris’ Charles de Gaulle Airport and whose story was partially based on Steven Spielberg’s film The Terminal has died there.

Mehran Karimi Nasseri, 76, died on Saturday after suffering a heart attack in the airport’s Terminal 2F around lunchtime, according to a Paris airport authority official. He was treated by police and a medical team, but he was not saved.

Nasseri lived in Terminal 1 of the airport from 1988 until 2006, first in legal limbo due to a lack of residency papers and later, seemingly by choice.

He slept on a red plastic seat surrounded by boxes of newspapers and magazines and had a shower in the staff restrooms. He passed the time by writing in his diary, reading periodicals, researching economics, and polling passing tourists. Staff dubbed him Lord Alfred, and he became somewhat of a celebrity among passengers.

“I’ll leave the airport eventually,” he told The Associated Press in 1999, smoking a pipe on his bench and looked frail with long thin hair, sunken eyes, and hollow cheeks. “However, I am still awaiting a passport or transit visa.”

Nasseri was born in 1945 to an Iranian father and a British mother in Soleiman, a region of Iran than under British control. In 1974, he left Iran to study in England. He claimed that when he returned, he was imprisoned for defying the Shah and ejected without a passport.

He sought political refuge in many European nations, including the United Kingdom, but was denied. The UN refugee office in Belgium eventually granted him refugee status, but he said his briefcase carrying the certificate was taken at a Paris train station.

Later, French authorities apprehended him but were unable to deport him since he lacked formal documents. In August 1988, he arrived at Charles de Gaulle, where he remained.

Further bungling by the bureaucracy and more rigorous European immigration laws placed him in legal limbo for years.

When he eventually acquired refugee papers, he expressed his surprise – and anxiety – about leaving the airport, according to an authorized official. He allegedly refused to sign them and ended up staying there for several more years until he was hospitalized in 2006 and then moved to a Paris shelter.

Those who befriended him in the airport say his mental state suffered as a result of years of living in the windowless environment. In the 1990s, the airport doctor was concerned about his physical and mental condition and described him as “fossilised here.” A ticket agent acquaintance likened him to a prisoner who is unable to “live on the outside.”

Nasseri had returned to Charles de Gaulle in the weeks before his death.