A Guinness World Records consultant said that Lucile Randon, a French nun who was 118 years old and died on Tuesday, gave the title to Maria Branyas Morera. 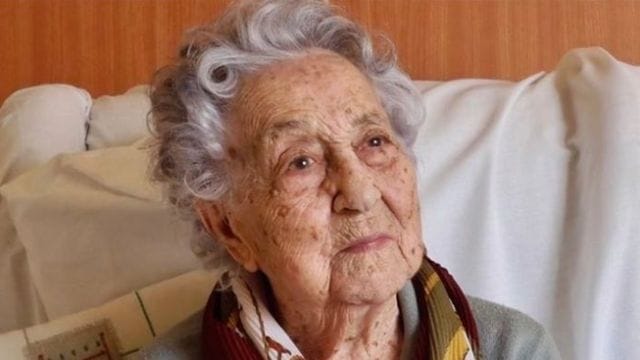 A Guinness World Records consultant said Wednesday that a Spanish great-grandmother who was born in the United States is probably the oldest person still alive. She is 115 years old. Robert D. Young, a senior consultant for gerontology, said that Lucile Randon, a French nun who was 118 when she died on Tuesday, gave the title to Maria Branyas Morera.

Young, who is also the director of the Gerontology Research Group’s supercentenarian research database, said that Guinness World Records still needs to make a final decision after checking Branyas Morera’s documents and talking to his family.

“We know what’s likely, but we don’t know for sure yet,” he told AFP in an email. Branyas Morera, who lived through the 1918 flu, two world wars, and the Spanish Civil War, was not available for interviews.

In the town of Olot in northeastern Spain, where Branyas Morera has lived for the past 20 years, the Santa Maria del Tura nursing home said it would hold a “small celebration” in the coming days to mark “this very special event.”

“She is in good health and continues to be surprised and thankful for all the attention,” a statement said. Rosa Moret, Branyas Morera’s 78-year-old youngest daughter, said that her mother’s long life was due to “genetics.”

Moret told regional Catalan television on Wednesday, “She has never been to the hospital, she has never broken a bone, she is fine, and she is not in pain.” On March 4, 1907, Branyas Morera was born in San Francisco. This was about a year after her family moved from Mexico to the United States.

The whole family decided to go back to Spain in 1915 when World War I was going on and made it hard to cross the Atlantic by ship. At the end of the trip, her father died of tuberculosis, and his coffin was thrown into the sea.

Branyas Morera moved to Barcelona with her mother. She married a doctor in 1931, five years before the Spanish Civil War of 1936–1939 began. They were married for 40 years before her husband died at age 72.

She has three children, one of whom has already passed away. She also has 11 grandchildren and 11 great-grandchildren. Branyas Morera got Covid-19 just a few weeks after she turned 113. She had to stay in her room at her care home in Olot, but she got better.

She told the Barcelona newspaper La Vanguardia in 2019: “I haven’t done anything special; the only thing I’ve done is live.”

Stay tuned to New Times Of India for more World News and bookmark our website so that you can’t miss any updates.

Making Plans to Hit the Gym and Lifting Weights? Take the Time to Have a Heart Scan First! Know Why!