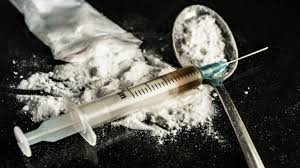 Manipur Police arrested two persons and seized drugs from them in Kangpokpi district.

In a successful operation against the war on drugs, Mizoram Police seized 500 soap cases of Heroin, weighing 6.836 kgs, valued at Rs 34.18 crores in the international market on Friday.

Police displayed the seized items on Friday and informed that two persons were caught on Thursday.

The Mizoram Police seized a total number of 500 soap cases of Heroin. “The biggest catch of Heroin in the history of the state”, said the Mizoram police.

The police informed that the team of the Special Narcotic police station had received secret information. Based on that, it launched an operation at Durtlang Leitan, Selesih road area on Saturday.

The case was registered under sections 21 (b) and 29 of the ND & PS Act (The Narcotic Drugs and Psychotropic Substances Act) and section 14 of the Foreigners Act, the police said. Further investigations are underway in the case.