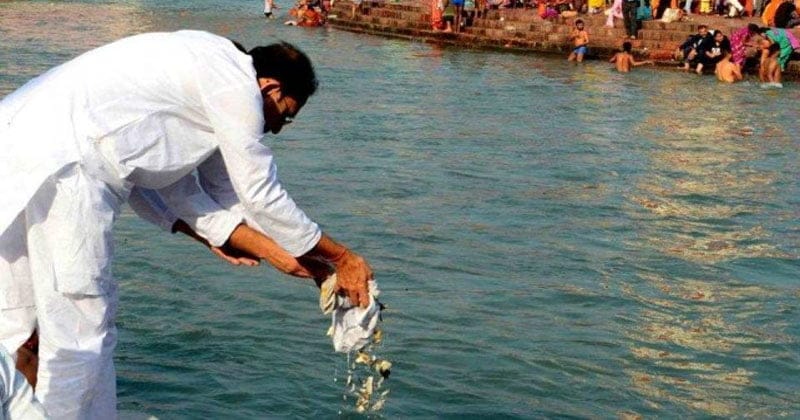 Gangaji is a river which is associated with Lord Shiva and Srihari Vishnu. The Ganga, which rose from the footsteps of Lord Vishnu from heaven, has incarnated on earth from Shivaji’s thorns. That is why Gangaji has special significance. That is why Gangaji is called Purifier. It is believed that bathing in the Ganges washes away all sins.

According to an ancient legend, Goddess Ganga one day went to Lord Vishnu in Vaikunth Dham and asked, ‘Lord! Bathing in my water destroys all sins, so how can I bear the burden of this sin? How can I get rid of the sin I have?’ Hearing this, Shri Hari Vishnu said.. Ganga! When sadhus, sages, Vaishnavas will come and bathe in you, all your sins will be washed away.

The Ganges River is so sacred that it can be gauged from the fact that the last wish of almost every Hindu is that his ashes should be dismembered in the Ganges River. Have you ever wondered where these bones go?

Even scientists cannot answer this question. Because the Ganges water dissolves the ashes in innumerable quantities and becomes pure and holy. On searching from the origin of Ganga to Gangasagar, the answer to this question could not be found.

According to Sanatan Dharma, after death, the ashes of the dead person are thrown into the Ganges for the peace of the soul. It is considered the best. These bones go directly to the feet of Sri Hari. The person who comes close to the Ganges at the end of the day becomes free after death. From these words the faith of Hindus towards Ganga is natural.

From a scientific point of view mercury is present in Gangajal. Due to which calcium and phosphorus in bones dissolve in water. Which is nutritious food for aquatic organisms. Sulfur is found in bones from a scientific point of view. Mercury is formed in conjunction with Mercury. Together they form mercury sulfide salts. The calcium left in the bones works to keep the water clean. In religious terms, Mercury is a symbol of Shiva. And sulfur is a symbol of power. All living beings eventually merge into Shiva and Shakti.

Astrologers say that drinking Ganges water daily keeps a person healthy. Enjoy longevity. Sins are destroyed by mere bathing, worship and darshan of the Ganges. If you have bad dreams, sprinkle Gangajal on the bed before sleeping at night. If there is a quarrel between the family members, sprinkle Gangajal in the entire house every morning. This remedy destroys the negativity of the house and creates an atmosphere of positivity. The effect of Vastu defects also ends. It is said in the scriptures that keeping Gangajal in the house always brings happiness and prosperity.