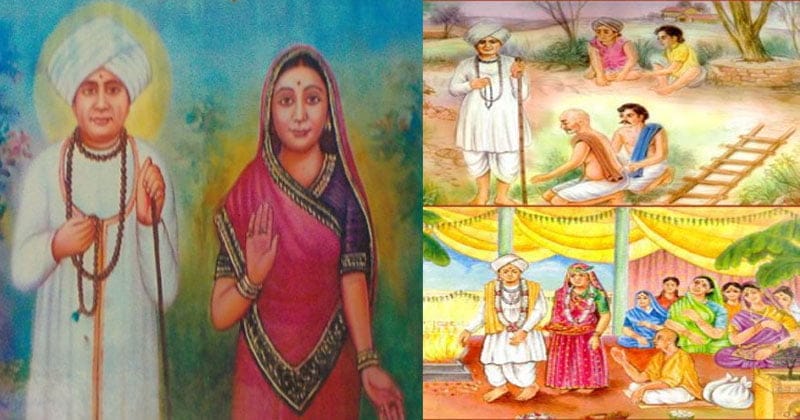 Birth of Saint Shri Jalarambapa. Was born in Vikram Samvat 14 Kartik Sood Satme was born in Thakkar clan of Lohana society. He was a devotee of Lord Rama. Jalaram Bapa was not interested in domestic life or in accepting his father’s business. He was always engaged in the service of pilgrims, saints and monks. They are separated from their father and their uncle Valjibhai instructs young Jalaram and his mother to stay at home.

In the year 1918, at the age of 18, he married Virbai, daughter of Pragjibhai Thakkar of Atkot. Veerbai was also a religious and saintly soul, so she also became disillusioned with Jalaram Bapa from worldly works and engaged in the work of serving the poor and needy. When Jalaram, at the age of twenty, decided to go on a pilgrimage to Ayodhya, Kashi and Badrinath, his wife Virbai also joined him.

At the age of 18 he became a follower of Bhoj Bhagat of Fatehpur, Gujarat. Bhoj Bhagat named him “Guru Mantra”, Mala and Shri Ram. He started ‘Sadavrat’ with the blessings of his Guru. Sadavrat is a place where food is provided to monks and needy people for twelve months of the year and 8 hours a day.

One day a sadhu came there and gave him an idol of Rama and predicted that Hanumanji would come there in the near future. Jalaram installed an idol of Rama as the family deity there and a few days later an idol of self-styled godman Hanuman was found in the ground. Along with this, idols of Sita and Lakshmana have also been installed there.

No one goes back except to eat food from this place. All this work was done by Jalaram in the initial years with the help of his wife Veerbai and then alone. In later years, the villagers also supported Sant Jalaram in this service. It is believed that due to the miraculous Akshaya Patra, they never run short of food. Soon after, his fame as an incarnate man spread. Every person coming to Virpur was fed food by his father without any distinction of caste or religion. This tradition of giving food continues even today in Virpur, Gujarat.

Once upon a time a tailor named Harji came to his father for the treatment of his stomach ache. Jalaram prayed to the Lord for him and his pain subsided. While doing so, he fell at the feet of Saint Jalaram and addressed him as “Father”. Since then his name became Jalaram Bapa.

After this incident people started coming to him for the treatment of their ailments and other ailments. Jalaram Bapa prayed to Lord Rama for him and the sufferings of the people were removed. People of both Hindu and Muslim religions became his followers. At 18, the son of a Muslim merchant named Jamal fell ill, and doctors had hoped for his recovery. At that time the petitioner told about the pamphlet received by Jamal. At that time Jamal prayed that if his son was cured, he would donate 50 minds of grain to Jalaram Bapa’s Sadavrat. When his son Jamal was recovering, he filled his car with food and Jalaram went to meet Bapa and said “Jala so Allah”.

At one time, the Lord himself came in the form of an old saint and said that Jalaram should donate his wife Veerbai Maa for his service. Jalaram consulted Veerbai and after getting her leave, he sent Veerbai to serve the saint. But after walking some distance to reach the forest, Saint Virbai asked Mann to stop there and stay. She waited there but the saint did not return.

So it was rumored that it was just a test to check the hospitality of the couple. Before the saint left, he went to Veerbai mother to keep sticks and sacks. Veerbai mother came home and talked to Jalarampa about Akashvani, Danda and Jolie. This Dando and Jolie can be seen even today in Virpur. It is placed in a glass case for display.

The main memorial of Jalaram Bapa is located at Veerpur near Jetpur town of Rajkot in Gujarat state. This memorial is the same house where Jalaram Bapa lived during his lifetime. It has been preserved in its original form. The monument contains objects used by Jalaram Bapa and idols of Rama Sita Lakshmana and Hanuman worshiped by him. Here you can also see the sacks and punishments given by God himself. But the main attraction here is the picture of Jalaram Bapa, which is the only surviving picture of Jalaram Bapa.