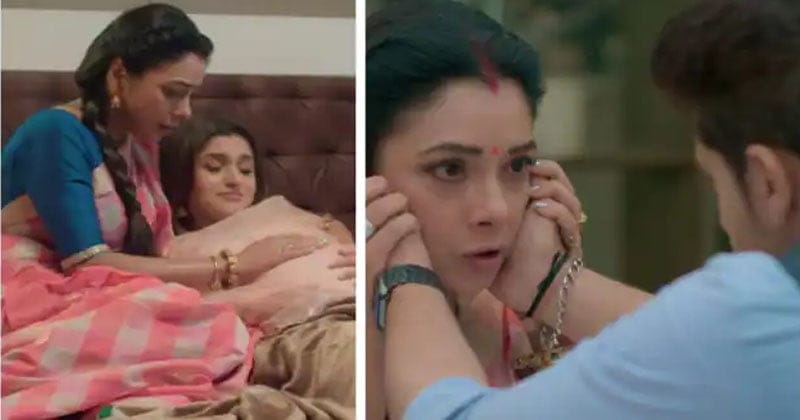 Anupama is watching some drama every day in the serial. At present, the makers of this serial are working hard to make the serial more interesting. Kinjal got hurt and had to be taken to the hospital. Vanraj gets very angry knowing his news. There are many more twists and turns to come in Anupama today.

Anupama will be seen in the serial tonight that the rest including Anupama and Kinjal will return from the clinic. Vanraj will be very angry seeing the condition of Anupama and Kinjal. Then Anuj Kapadia will say that both Kinjal and her baby are quite healthy.

Vanraj gets angry and goes to Anupama for his negligence. Anuj will not be able to see this and he will get angry with Vanraj. There will be a conversation between Vanraj and Anuj against Anupama. Babuji will pacify them anyway.

Vanraj will clearly say that now he and his children will never come to Anupama’s palace. Just then Kinjal will cry and request Vanraj to let her stay with Anupama for some time.

Vanraj will respect his wife’s decision and return home. As soon as he comes home, he will get angry at Anupama for insisting on going to her house. Had he not said so, this incident would not have happened to Kinjal. Bane will find out and he will be furious.

On the other hand Anuj will repeatedly tell Anupama who Vanraj is, who comes to his house and insults him. Anupama will not say anything and Anuj’s anger will go to the seventh heaven. Anuj will only say that she has no problem with her family members, but if her ex-husband comes home again and again, she will not tolerate it.

Anupama along with her and Barkha will request Kinjal to leave the house so that Vanraj doesn’t do any spectacle again. Anupama will refuse to listen to Anuj and says that he will not be able to stay away from his children because of the elders’ fight.

Once upon a time, Kareena Kapoor was madly in love with Rahul Gandhi, ready to do any work

The list of top serials of the week became public.