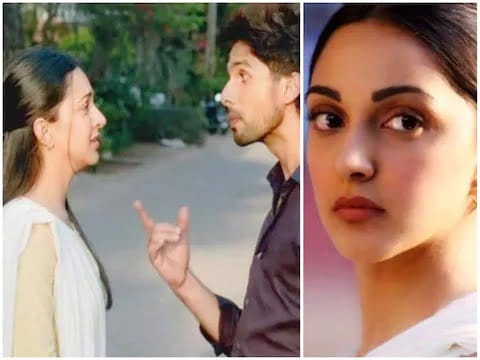 Kiara Advani has starred in many hit films in her 8-year Bollywood career and has created a distinct space among the audience due to her powerful performances. Kiara will be seen in many upcoming films as she now has several projects that she is constantly working on. Amidst all this, Kiara talked about her superhit film ‘Kabir Singh’.

Kiara is seen with Shahid Kapoor in this film. The film is directed by Sandeep Bhanga Reddy. The film stars Kiara as ‘Preeti’ and Shahid as ‘Kabir’. Preeti-Kabir love story on screen made everyone romantic. In conversation, Kiara specifically recalled Shahid Kapoor’s ‘slap’ scene in the film, for which she was trolled a lot on social media. Kiara was engrossed in this scene overnight.

I remembered the slapping scene

In a conversation with ‘Bollywood Hungama’, Kiara spoke about the slapping scene in ‘Kabir Singh’ and said people call it ‘blown out of proportion’ but to me it’s a love story. According to the report, he said, ‘Payer ki baat hai.

It’s the only thing that allows you to forgive certain behaviors in life.” He makes his point that relationships are too complicated and it’s too easy for a third person to say ‘get out of that relationship’ if someone cheats or disrespects the other person, or slaps someone.

However, it is extremely difficult for these two people in that relationship to do so.

Kiara also said about her character Preeti, ‘Preeti leaves Kabir after that slap in the film, which people never forget. Although the truth is that she went back to him. Some people said ‘oh she shouldn’t have gone back’, but I think she finally made up her mind and this is what she loves. But in the end today it is just a film and a story.