Kartik Aaryan Sings “Ghootne Toot Gaye” While Doing Ice Therapy and Posted a Picture of Himself Pouting on Instagram!!

Kartik Aaryan has released a photo from the set of his forthcoming flick Shehzada's song scene. He had to go to ice therapy after the shoot since his knees and calves were hurting. 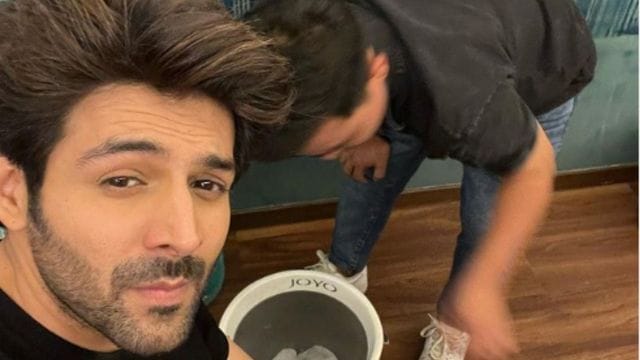 Kartik Aaryan recently completed filming for a song for his next flick Shehzada. Late Monday, he posted a photo of himself, claiming that his knees and calves were hurting and that he required ice therapy. He, on the other hand, didn’t forget to pout while sitting with his legs in a pail of freezing water. He also took a photo while holding a chunk of ice in his hand.

“Main aise zor se nachi Aaj ke ghutne Tut Gaye,” a fan pointed out, was probably on Kartik’s mind when he wrote the caption. “Why did your caption give me “ki ghungroo toot gye turururu” vibes?” questioned another. “Take care, Kartik,” some admirers wished the actor.

The film was directed by Rohit Dhawan of Desi Boyz and Dishoom fame. It stars Manisha Koirala, Paresh Rawal, Ronit Roy, and Sachin Khedekar in addition to Kartik and his Luka Chuppi co-star Kriti Sanon. It is set to be released on February 10.

Kartik will not only play the protagonist but will also make his directorial debut with Shehzada. The film is the official Hindi remake of the 2020 Telugu action drama Ala Vaikunthapurramuloo, starring Allu Arjun. It is produced by Bhushan Kumar, Allu Arvind, and Aman Gill. Kartik has recently joined the team as a producer.

“It’s been a joyride creating this film with Kartik as an actor, but now it’s even more thrilling with Kartik on board as one of the film’s producers. Kartik, like us, believes in broad-reaching films that appeal to youth, families, and the masses, and Shehzada is aimed at all of them, so it was logical for him to choose this picture for his debut as a producer “They stated in a press release.