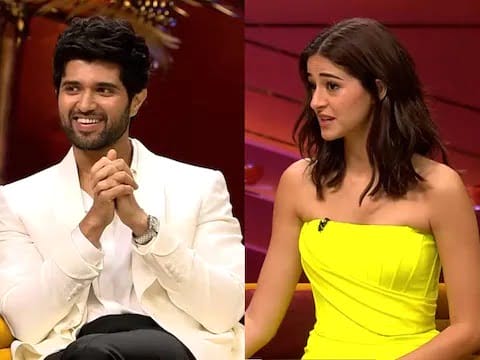 In the latest episode of Koffee With Karan, he is now going to appear as a guest actor, the upcoming episode of the show will feature the lead cast of Karan Johar’s upcoming film ‘League’ i.e. actors Vijay Deverakonda and Ananya Pandey.

In the promotional video for the fourth episode of the show, Vijay Devarakonda is seen at his stylish best, while Ananya Pandey is yet again trolled for her bad English. In this new promo of the show, Karan is seen having a lot of ‘bedroom talk’ with Ananya and Vijay.

In fact, in the second episode of this chat show, Karan makes a ‘cheese slice’ about Vijay over the comments made by Janhvi Kapoor and Sara Ali Khan about Vijay Deverkonda.

In such a situation, when Vijay Devrakonda came on the show, Karan even discussed it with him, to which Vijay said, “I’m scared of where this is going.” Along with this, the hot superstar will be seen talking about a lot of things from his love interest to being India’s heartthrob which he has never talked about till now.