Jin from BTS has posted his first pictures since joining the South Korean military. He also had a message for BTS ARMY. Look at it here. 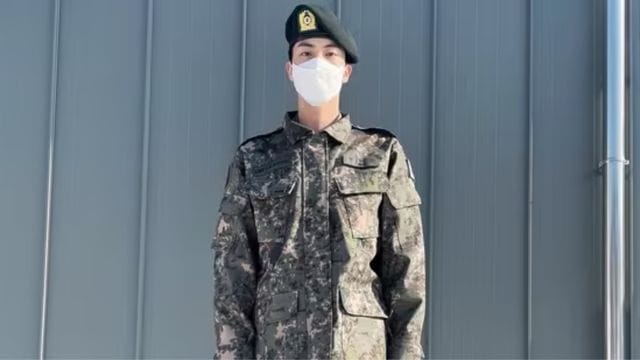 Jin, the oldest member of BTS, sent pictures and a message to fans for the first time since he joined the South Korean military. Jin put up his pictures, including selfies, on Weverse on Wednesday. In a picture, Jin is standing with his arms at his sides while wearing his uniform. A mask was also worn by the singer.

Jin looked at the camera while taking a selfie, giving fans a better look at his face. In another picture, he gave the victory sign. Jin wrote this about the photos: “I’m enjoying my life. I’m posting pictures now that the military has given me permission to do so. ARMY, have fun and be safe.”

The photos and message from Jin made the BTS ARMY feel sad. On Twitter, someone wrote, “Even though he must have been so tired, he asked permission to come and tell us about himself. He also told us to be happy and healthy. I’m so sad. I love you so much Jin.”

“Jin is proud of all the armies that have been waiting for him to post. Let’s keep waiting and not spread pictures that Jin hasn’t posted, said one comment. “Right now, all I can do is look at these pictures and cry.” “I missed him God, I really missed him. Another fan said, “I hope you stay warm and healthy.”

Jin’s full name is Kim Seok-jin, and he joined the army on December 13, 2022. Several news sources say that Jin is training at an army boot camp for a front-line division in Yeoncheon, which is 60 kilometres north of Seoul. 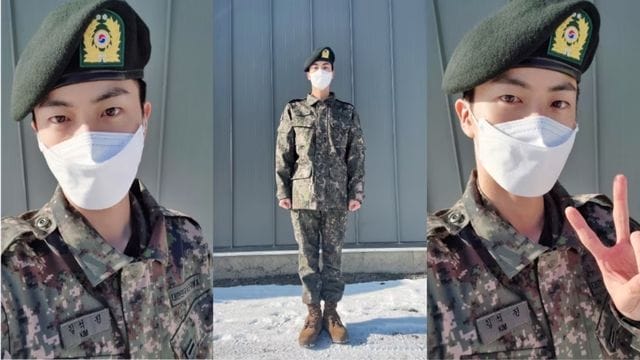 Earlier this month, Bangtan TV shared a video message from Jin that was made while the show Running Man was being filmed. Jin said in the video, “Hello, everyone! I’m Jin from BTS. When the video comes out, I won’t be a civilian anymore. But I’m here in front of the camera because I wanted to leave you something, even if it’s just a message.”

He also had said, “I want to show you these videos whenever I have time. I may not be with you right now, but if you wait a little while, I’ll come looking for you. I’ll see you again soon. So much for today. I’ll share another video the next time I have time. For now, that’s all.”

All able-bodied men between the ages of 18 and 28 in South Korea must serve in the military for about two years. All BTS members were able to put off starting their military service until they turned 30.

Other members like RM, Suga, J-Hope, Jimin, V, and Jungkook have their own plans for how they will do their military service. The group, which came together in 2013, said last year that they hope to get back together around 2025 after they finish their service.

Get more updates from Bollywood, Hollywood, Music and TV Show along with the latest Entertainment news in New Times Of India.

Honey Singh Says That Every Day and Night, He Prayed for Death and Said “Mujhe…

In a Video Guru Randhawa Posted With Shehnaaz Gill, Asked Their Followers if They…