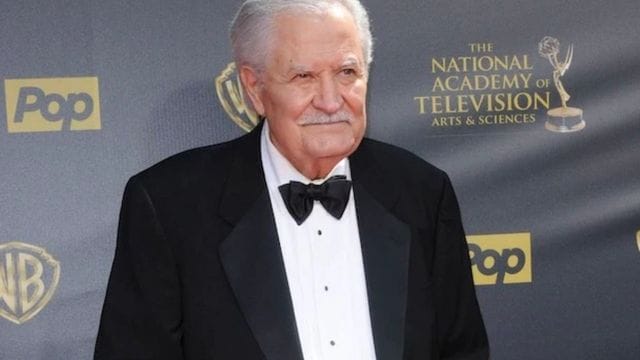 John Aniston, who appeared in Star Trek: Voyager’s “Workforce,” died at 89. The actor was recognized for his role on Days of Our Lives and as Jennifer Aniston’s father. Deadline reports no reason for death.

Jennifer Aniston called her father “one of the most beautiful humans” she’d known. She provided images of John Aniston before and after his Star Trek appearance, starting with a baby shot of his daughter. See below.

Aniston debuted on the 87th Precinct as “Officer #1” in the episode “New Man in the Precinct” in 1962. He has been a mainstay on soap operas since 1970 when he first debuted as Eric Richards on Days of Our Lives. He joined the cast of Love of Life in 1975 as Eddie Aleata and appeared in one episode.

From 1980 through April 1984, he played Martin Tourneur, Mary Stuart’s new love interest on Search for Tomorrow. In July 1985, he returned to the cast of Days of Our Lives for a second time, this time as Victor Kiriakis, and played the part until his death. For his role, he was nominated for a Daytime Emmy Award for Outstanding Supporting Actor in a Drama Series in 2017.

Aniston was revealed in April 2022 as the recipient of a Daytime Emmy Lifetime Achievement Award during the 49th Annual Daytime Creative Arts & Lifestyle Emmy Awards on June 18.

Aniston had a daughter, Nancy Dow, with his first wife, and a son, Alexander, with his second wife, Sherry Rooney. Telly Savalas, one of his best friends, was the godfather of his daughter Jennifer.

Aniston was born on the Greek island of Crete on July 24, 1933. When Aniston was two years old, his family left Crete for the United States; upon arrival, his father anglicized the family names. The family settled in Chester, Pennsylvania, and ran a restaurant.

Aniston earned a bachelor’s degree in theatre arts from Pennsylvania State University. He joined the Alpha Chi Rho fraternity while at Penn State. Following graduation, he joined the United States Navy as an intelligence officer on active duty in Panama and then in the reserve, rising to the rank of lieutenant commander.