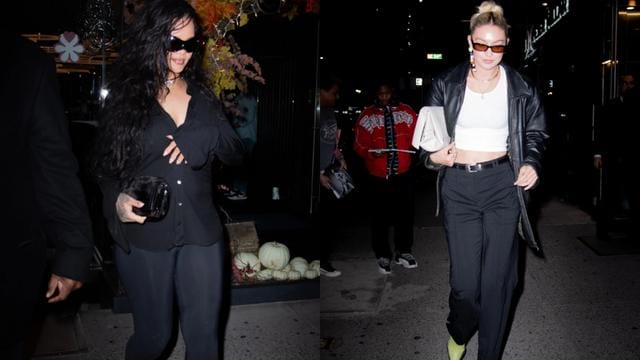 Rihanna and Gigi Hadid both wore sophisticated black and white ensembles when they dined at the upscale restaurant Caviar Russe on Saturday night.

Rihanna, 34, and Gigi Hadid, 27, were stunning to behold on November 5! The singer and model appeared as fashionable as ever during their dinner at Caviar Russe in New York City, New York. Gigi wore a white crop top under a long black leather jacket, black pants, and lime green pointy-toed boots, while Rihanna wore a button-down top with matching leggings and pointy-toed boots.

The dinner follows rumors that Gigi has been hanging out with Leonardo DiCaprio, which made headlines. The blonde celebrity and the actor have apparently been getting to know one another, but she has not yet introduced him to her 2-year-old daughter Khai, whom she shares with her ex-boyfriend Zayn Malik.

“Gigi is still getting to know Leo, so she is not considering introducing him to her daughter at this time,” a source told HollywoodLife recently.

“In fact, she hasn’t even considered it,” they continued. “Gigi’s career is in full swing, but being a mother to Khai is always her top priority. Although Gigi is once again single, she will not introduce her daughter to everyone she meets.

“Gigi believes she would need to be very serious with someone before she would consider introducing them to her daughter,” the source continued. “She is extraordinarily protective of Khai. Being a mother has completely altered Gigi’s perspective on dating. It is no longer just about her. She has a child, and that child is more important to her than anyone else.”

Similarly to Gigi, Rihanna, who has been posting incredible photos of herself on Instagram, has been focusing on motherhood. The “Umbrella” singer recently welcomed her son with boyfriend A$AP Rocky and has been attempting to balance motherhood and her successful music and business careers.

“The secret to Rihanna’s ability to balance everything is the great team she has supporting her in all areas, including Rocky. According to a close friend of the nine-time Grammy winner, he is her MVP.