In an Unseen Photo Posted by Kiara Advani Amid Wedding Rumours, Birthday Boy Sidharth Malhotra Appears Lost in Her!

On Sidharth Malhotra's birthday, Kiara Advani shared a cute photo of them from one of their trips. Ananya Panday said she took the pictures. 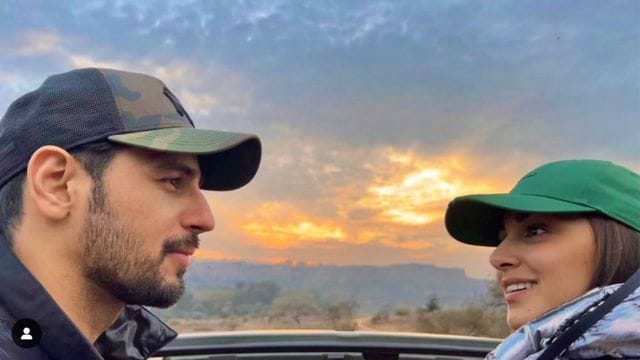 Kiara Advani posted a photo of herself and Sidharth Malhotra from a trip they took together, which led to rumours that they were getting married. On Monday, Sidharth turned 38. On his birthday, Kiara posted a picture of him and her with a caption about how much they love each other. This made fans wonder if they were finally making their relationship official on Instagram.

In the picture, the birthday boy seemed to be looking at the woman who was said to be his girlfriend. Kiara’s smile is so beautiful that it makes her lose herself in him. In the background, the setting sun is hidden by clouds. Kiara shared the photo with the caption, “Whatcha lookin’ at, birthday boy?” She then added emojis of a monkey, a cake, and a heart-eyes face, among others.

As soon as she posted the photo, their fans and friends from Bollywood rushed to the comments and left nice things for them to read. Ananya Panday said, “I think I took this picture, cuties.” Tanya Ghavri, a celebrity stylist who has worked with both Sidharth and Kiara, said, “Awww, that’s the cutest.” Also sending their love were Sanjay Kapoor, Anaita Shroff Adajania, and others.

One of the fans said, “Get married as soon as possible.” “He’s looking at his birthday present that will last forever,” said someone else. Some other fans also said, “Best thing that happened on the Internet today.”

In the 2021 movie Shershaah, Sidharth Malhotra and Kiara Advani were seen together. In the movie, he played Captain Vikram Batra, who was given the Param Vir Chakra after his death. Kiara played his love interest, Dimple Cheema. People say that the two have been going out for a long time.

Sidharth and Kiara have never said for sure that they are dating, but they are often seen together on vacations, at parties, and even at each other’s homes. In an episode of Karan Johar’s Koffee With Karan season 7 with Shahid Kapoor from last year, Kiara said that Siddharth was more than just a friend. Sidharth recently said that Kiara’s phone number was on his “speed dial” list.

It is said that the Shershah actors will get married this year in Rajasthan. Several reports say that they have even chosen the locations and venues for the rumored wedding, which will have a long list of famous people and colleagues as guests. But neither Sidharth nor Kiara have said anything about it. Mission Majnu will be the next movie with Sidharth in it.