In a Promo for Bigg Boss 16, Simi Garewal Stands Up for Shaleen Bhanot and Says, “Don’t Be Hard on Him.” Tina Datta Responds. Watch

Simi Garewal showed a clip from Bigg Boss 16, in which she defended Shalin Bhanot after he answered a question about Tina Datta. Check out here. 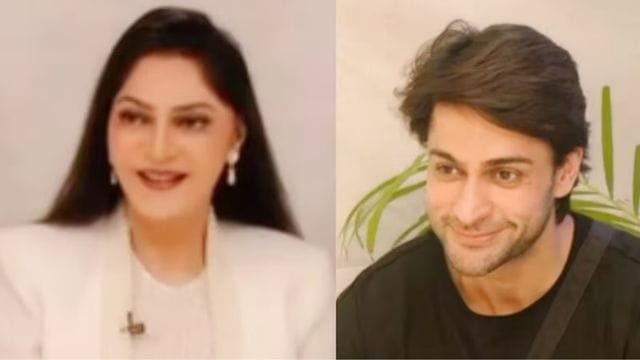 Simi Garewal will be on the 16th season of Bigg Boss. The veteran actor and celebrity chat show host, known for her show Rendezvous with Simi Garewal, posted a promo video on Thursday. Simi posted a video on Instagram Reels of her meeting the Bigg Boss 16 contestants in the Bigg Boss house.

Simi was seen chatting with Shalin Bhanot, Priyanka Chahar Choudhary, and others while wearing her signature all-white outfit. In the short video she posted, Simi was seen standing up for Shalin.

In the clip, as the contestants walked into a white room that looked like the set of Rendezvous with Simi Garewal, a voiceover said in Hindi, “For the first time in 16 years, there will be a rendezvous with Simi Garewal…” In the video, she asked Priyanka to choose between two options: “Aapke samne doh plate hain, ek mein stardom, doosri plate main hain unconditional love.” Priyanka chose love.

Simi then went to Shalin and asked him to choose between two options. The clip didn’t show Simi’s full question, but she said, “Ek (plate) mein Tina hai…” Shalin replied, “Whatever is in the other plate, I will choose that.”

Tina and the other people there were surprised by his answer. Simi was then heard standing up for Shalin and jokingly telling people not to be so hard on him. Tina was seen laughing at Simi’s remark. In an earlier episode, Shalin stood up for Tina when host and actor Salman Khan yelled at her and asked about her relationship with Shalin. He told Salman to stop being “so hard” on Tina, which made the host angry.

Simi posted a video of her Bigg Boss 16 episode with the words, “Tonight at Big Boss’s house! Watch ColorsTV!” Many of Simi’s fans wrote in the comments section of her Instagram Reels that they were excited for the next episode.

“Phew!! I didn’t expect this comeback, but at least there’s hope now “read an answer. “I’m really excited to see this episode. Not being able to meet up with Simi Garewal, “fan wrote. Another said, “It’s great to see you back on TV!” A fan also said something about Simi’s look: “You haven’t changed at all.”

Hrithik Roshan Goes Out With Arslan Goni, the Boyfriend of His Ex-wife Sussanne Khan, and Calls Him “Yaara”!!