On Bigg Boss 16, Shalin Bhanot and Tina Datta got into a big fight. He told her she was a "dogla" and a "sadist." Tina told him she wanted to leave the house by calling him "gande aadmi." Here is the video. 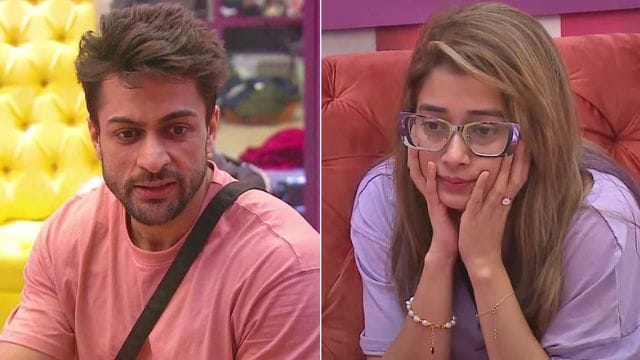 Tina Datta and Shalin Bhanot, both of whom were on Bigg Boss 16, got into a heated argument inside the house. Wednesday, ColorsTV put up a short clip of the two people yelling at each other on Instagram. Shalin talked about Tina’s personality and said things like “dogla” and “ladko se chipakne waali” about her.

Tina lost her temper, called him “ganda aadmi,” and said, “I’m going to f***** slap you.” She said that Shalin is so bad that he didn’t treat his ex-wife with respect. A lot of fans talked about the promotional video. The promo was posted on the channel’s social media accounts with the caption, “Tina and Shalin got into an ugly fight over words.”

Tina yelled at Priyanka Choudhary in the beginning of the promo, “I want to leave this show now” (Mujhe iss show se jaana hai). Then, Shalin can be heard saying to Tina, (ap dogle ho, aapke sath koi ek ladka khatam hota hai, toh ap dusre se chipakne lag jaate ho) “You’re a hypocrite, when one guy walks away from you, you go after another man and try to get closer to him.”

Tina was angry and said, “He’s trying to destroy my reputation, and he couldn’t keep her ex-dignity, wife’s what a horrible person Shalin Bhanot is.” Shalin used to be married to Dalljiet Kaur, but they broke up in 2015.

In response to the video, one person wrote, “Lol, Shalin said yesterday in a confession room that he didn’t want to be rude to any woman, and now look at him (laughing emoji)!” Another person said, “Shalin doesn’t have any self-respect, he’s always doing stupid things, but he doesn’t care. He’s just after Priyanka’s money” (He always go to either Tina or Priyanka after fights).

Both of them are being used by Priyanka for footages.” Someone else wrote, “Shalin didn’t tell the truth today, so neither of them are real.” “Tina is right, we can’t talk about other people’s characters,” one person wrote.

The 16th season of Bigg Boss airs Monday through Friday at 10 pm. The show airs on ColorsTV on Saturdays and Sundays at 9 p.m. Salman Khan is the host of the show. He joined the show in its fourth season. Some of the show’s most well-known contestants are MC Stan, Shiv Thakare, Shalin Bhanot, and Tina Datta.

The Wedding of Athiya Shetty and Kl Rahul is Coming Up, and He Has Already Started Making Arrangements at His Mumbai House. Watch the Video!