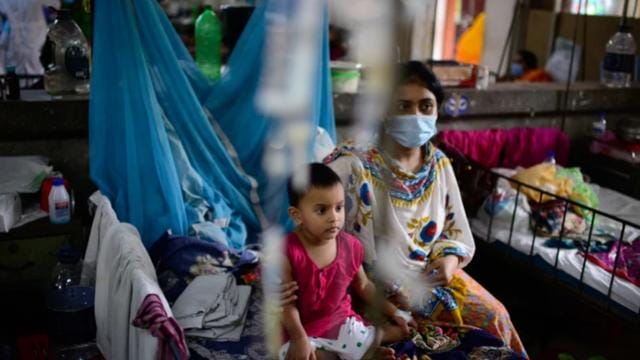 According to a top DGHS official, dengue fever will begin to decline in the third week of this month. Five more dengue victims died in the last 24 hours, bringing the total number of dengue deaths in Bangladesh this year to 192.

According to the Directorate General of Health Services, dengue cases in Bangladesh have continued to rise, with 888 additional individuals hospitalized by the mosquito-borne fatal illness during the same period (DGHS).

A total of 3,248 dengue patients are presently being treated in hospitals across the country, including 1,915 in the capital.

The Business Standard (TBS) quoted Professor Dr. Nazmul Islam, director of the DGHS Communicable Disease Control unit, as saying, “Dengue fever is projected to begin to decline in the second or third week of this month. Dengue fever will return if it rains again.”

“If city corporations continue to eradicate mosquitoes, waste management is good, and people keep their surroundings clean, the number of patients will begin to decrease,” he added.

The DGHS reported the first dengue-related mortality of the season on June 21. So far this year, the directorate has documented 46,486 dengue cases and 43,046 recoveries.

The vaccine has already been licensed in Indonesia, and it is scheduled to hit the market in early 2023. Furthermore, a number of other countries, including the United States, have expressed interest in approving the drug.

However, Bangladesh has shown little or no interest in the vaccine so far, citing a desire to focus on preventive measures in the fight against mosquito-borne disease.

Furthermore, authorities say they are monitoring vaccine updates in other countries as well as how the World Health Organization (WHO) responds to them.

This year has seen the worst dengue outbreak in Bangladesh. As of Wednesday, 187 people had died as a result of dengue infection, the most in the last 22 years.