Kris Gethin, who works out with Hrithik Roshan, recently talked about his 12-week body transformation plan on a podcast. Continue reading! 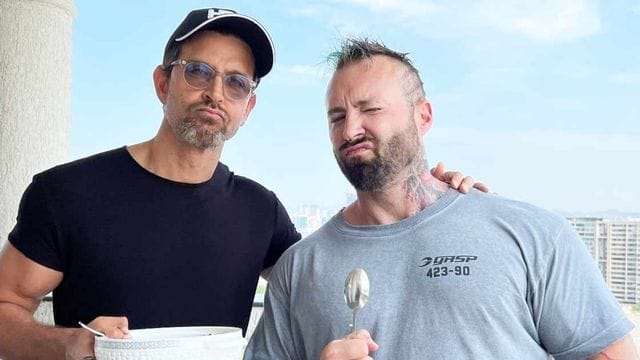 After giving one of the best performances of 2022 in ‘Vikram Vedha,’ Hrithik Roshan dove headfirst into ‘Fighter,’ India’s first aerial action comedy. The actor, who is known for getting into the skin of his characters and even changing his body to fit his roles, went through a tough 12-week body transformation for Fighter with the help of international celebrity trainer Kris Gethin.

Kris, who was voted the world’s top transformation expert, recently used Hrithik Roshan as an example of hard work and discipline on his podcast.

Kris talked about his time with the actor and said, “A lot of people don’t know this about Hrithik, but he works very hard. I worked with Hrithik around 2013, and he didn’t take a day off for about 7 months. He worked his tail off, and sometimes he would start at 4 a.m. and finish at 7 p.m. Even though it is hard work, he always met his goals, ate his meals, and went to bed early. Gethin take the interview of Hrithik Roshan. Here is the video!

“Of course, it was hard if he had to shoot all night, but he would always get his workouts in,” Kris said about the times he worked out with the actor.

Hrithik Roshan was praised by an expert who has helped millions of people change their bodies no matter what their situation was. This expert said that Roshan’s commitment to diet and fitness is unshakeable.

Kris Gethin had already asked on social media, “Do you make excuses or commitments?” When it comes to food, most people fail. I took this picture of Hrithik Roshan and me eating a meal while we were having a meeting at a building site a few days ago. “He didn’t leave the meeting or the building site, he just ate his cold meal because it was meal time (he eats six meals a day plus a protein shake because he is committed to his goals.”)

Thai Vintage Photos of Ananya Panday, Navya Naveli Nanda, and Vedang Raina, Star of the Archies, on a Yacht!!

New Features Coming to Whatsapp in 2023: Pip for Video Calls, Texts That Can Be Read Once, Calls on the Web, and More

7 Aerobic Exercises You Can Do at Home This Winter to Lose Weight!

Should You Never Eat Any Kind of Sugar at All? Hear What the Experts Have to Say!!