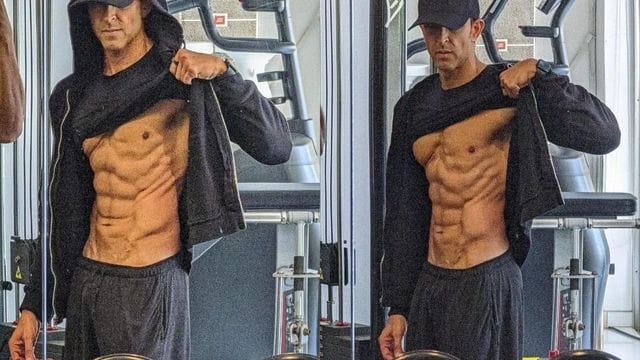 Hrithik Roshan is known as one of the best-looking and most talented actors in Bollywood. Fans love the Dhoom 2 actor not only for how well he dances but also for how much he likes to work out. Fans really liked how Hrithik looked in the movie Vikram Vedha, which just came out.

And after a short break, the actor’s new photo has once again taken the internet by storm. People on Twitter were seen drooling over the 48-year-old actor Hrithik Roshan after seeing his 8-pack abs in his latest photo.

Hrithik Roshan posted a mirror selfie to his official Instagram account. In it, he shows off his eight-pack abs. In the caption for the photos, Hrithik wrote, “All right, let’s go to 2023.” Fans love Hrithik because he has a strong body, and his female fans have been seen getting jealous of his girlfriend, Saba Azad.

Fans aren’t the only ones who like Hrithik Roshan’s eight-pack abs, though. On his pictures, Varun Dhawan wrote “Ok then.” Anil Kapoor, on the other hand, wrote “Yeh aaya real fighter” in the comment box. “Sir, just give me two abs,” one fan wrote. Someone else cheered and said, “Old Hrithik is back!”

On the job front, Hrithik Roshan and Deepika Padukone are currently making the movie Fighter, which will be his next movie. In the year 2024, this movie will be shown in theatres. It is said that Anil Kapoor is also in this movie. Hrithik is hoping that Deepika Padukone’s movie will do better at the box office than his last big-budget movie, Vikram Vedha. This Telugu remake also had Saif Ali Khan, Rohit Saraf, and Radhika Apte in addition to Roshan.

“Okay then,” Varun Dhawan wrote with an emoji of his hands going up. Kunal Kapoor, another actor, replied to Roshan’s post with four fire emojis. Ronit Roy wrote “Wooooohoooooo” with three heart eyes emojis because he was happy. Hrithik was last seen in “Vikram Vedha” with Saif Ali Khan. His upcoming action movie, “Fighter,” which also stars Deepika Padukone and Anil Kapoor, is sure to be a big hit.

Is This Week, the Samsung Galaxy F04 Will Be Released in India? The Release Date Has Been Officially Set!