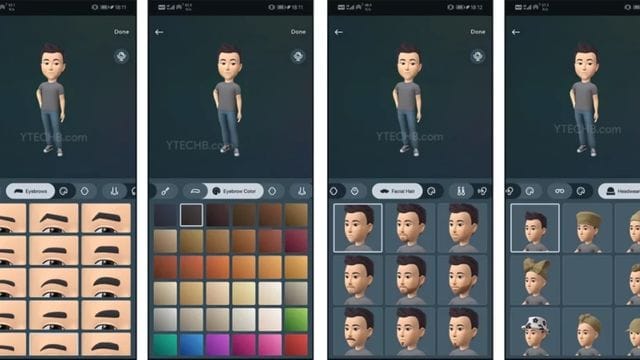 WhatsApp just added the ability to create avatars that can be used as profile photos, shared with contacts, and used as conversation stickers. The new feature will include a variety of editing tools that will allow users to create a digital version of themselves with different face traits, haircuts, and apparel.

Avatars can then be transformed into bespoke stickers depicting reactions and emotions, injecting a bit of levity into app chats.

The ability to send avatar stickers is a feature included in several social media and messaging apps, including Instagram and Facebook. It’s remarkable that WhatsApp waited this long to provide the service to its users, given that the platform is controlled by Facebook.

Those who choose the messaging app because of its end-to-end encryption can now participate in the fun of creating a character based on their true identities.

To begin creating a WhatsApp avatar, launch the app and select ‘Settings’ (tool icon). Navigate to ‘Avatar,’ select ‘Create Your Avatar,’ and then press ‘Get Started.’

Users will be prompted to adjust their avatar’s skin tone before being directed to the complete editing suite, where they can change numerous avatar attributes such as hairdo, hair color, wardrobe, body build, face shape, and a variety of facial traits. Makeup, piercings, a hearing device, sunglasses, and headgear are additional options. When you’re finished customizing the avatar, tap ‘Done’ to save it.

Once an initial avatar has been created, WhatsApp users can alter it at any moment to change the appearance of the character. If users are unhappy with their first design or decide they no longer want a WhatsApp avatar, they can remove it and start over, or they can quit using the function entirely.

Those who choose to be their cartoon self can design a profile photo to post on the chat platform instead of a real-life photograph of themselves.

However, the availability of personalized stickers based on a user’s likeness is the major reason avatars are a lot of fun to use on messaging apps like WhatsApp. For the time being, there are 36 personalized stickers available to use, but according to WhatsApp, various improvements to the feature are in the works, including the option to create multi-character stickers using other people’s avatar designs.

To use WhatsApp’s personalized avatar sticker pack in the meantime, begin a chat on the mobile app, tap the sticker symbol on the right side of the text field, and then tap the avatar icon in the bottom-right corner of the screen. WhatsApp avatar stickers are organized into emotion categories to make it easy to pick the best one to utilize in conversations or group messages.

Russia is Suffering as a Result of Europe’s Oil Embargo