Here’s a “Real BTS” Photo of Shahid Kapoor and Mira Rajput in the Set Of Farzi!! 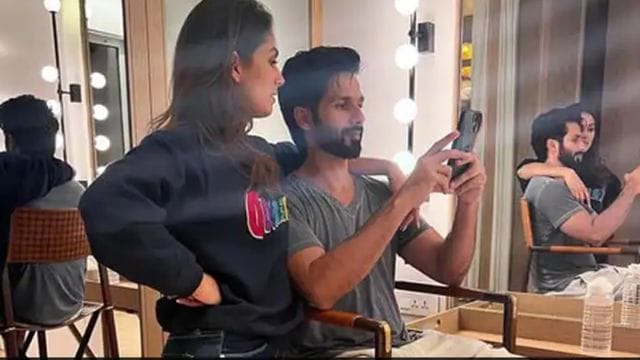 On Saturday, Shahid Kapoor was on the list of trends for all the right reasons. The trailer for his first digital project, Farzi, came out on Friday afternoon, and it blew up the Internet right away. Shahid’s wife Mira Rajput was with him backstage at the event where the trailer was shown. She and the actor watched the trailer together.

Mira posted a picture to her Instagram feed. In the picture, which was taken in a green room, she can be seen “watching Mr. K beside Mr. K.” The post shows the two of them looking at a phone screen while Shahid Kapoor holds the phone. Mira Rajput wrote in the caption, “Currently watching Mr. K beside Mr. K,” and she added the hashtag “real BTS.” Rapper Badshah and fashion designer Kunal Rawal left red heart symbols on her post. Take a look:

Farzi, which Raj and DK made, directed, and wrote, is Shahid Kapoor’s first OTT show and first series. The series is a fast-paced crime thriller with eight episodes. Shahid Kapoor plays Sunny, a con artist who wants to get rich quickly by printing fake money. But then a fiery task force officer, played by Vijay Sethupathi, comes into the story and makes it his mission to catch the street artist who is smarter than everyone else.

Farzi is the first time that Shahid Kapoor and Raj-DK have worked together. The actor posted the trailer for Farzi on social media on Friday. His cool caption said, “Sab Farzi hai… “Everything is fake, but this trailer is real. #SabFarziHai.”

Look at it here:

Shahid Kapoor, Vijay Sethupathi, and other cast members, along with the movie’s creators Raj and DK, showed off the Farzi trailer at an event in Mumbai on Friday. Even at the venue, the Haider actor showed a glimpse of his movie-like entrance. “Rules don’t matter; the whole game needs to be changed!” He wrote in the caption, “#SabFarziHai #Farzi.”

Response From Tina Datta’s Mother to Sreejita De’s Labelling of Her Daughter a “Homebreaker” on Bigg Boss 16: The Question Was, “Kya Woh Proof De Payegi?”

Simple Methods to Maintain Fitness Even with a Packed Schedule!