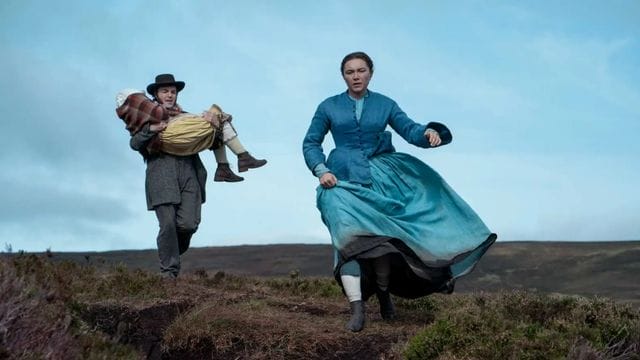 Sebastian Lelio’s film about religious fanaticism and others who are suspicious of it stars Florence Pugh.

The Wonder’s opening sequence opens on a modern film set, then the camera pans to reveal the setting of a story in the Irish Midlands of the nineteenth century. Niamh Algar’s voice leads us through the setting of a land devastated by the Great Famine.

“We are nothing without stories, therefore please believe in this one.” To some level, it feels needless, as if the filmmaker is purposely anticipating the impossibility of suspending belief in this scenario.

However, we must believe in this story, as The Wonder, adapted from Emma Donoghue’s namesake work, rises beyond its fourth-wall-breaking start to become a deeply evocative and ultimately rewarding movie.

The film begins with a close-up of Florence Pugh, who plays Lib Wright, an English nurse summoned to Ireland to verify a miracle. It is 1862. Anna O’Donnell (Kla Lord Cassidy), an 11-year-old girl, has been going four months without meals.

She is supposed to keep an eye on the girl for two weeks and report back to the self-appointed men’s committee (played by Toby Jones, Ciaran Hinds, and Brian F. O’Byrne). When Lib arrives, she discovers that a nun named Sister Michael (Josie Walker) has been summoned to look over her during the night.

When she first meets the girl, she tells her that she survives on manna from heaven. Her mother Rosaleen (played by Cassidy’s real mother Elaine) informs her that her daughter is not hungry. Lib is taken aback by the family’s extremely religious lifestyle, and her cynicism mirrors ours.

She checks on the girl on a regular basis, her mistrust growing as she gets closer. A writer named William Byrne (Tom Burke) appears as well, anxious to write an article about the girl. He, too, has a tale that will serve as a connecting link to the intervention that will take place later.

The Wonder, starring Florence Pugh and inspired by Emma Donoghue’s book, tells the story of Anna O’Donnell, a young Irish girl whose Catholic family claims she hasn’t eaten anything since her eleventh birthday four months earlier.

Pugh plays English nurse Lib Wright, who has been called in to express her medical opinion on the child’s illness. Anna is also given the care of a nun. Will the truth about Anna emerge from the conflict between faith and medicine? The Wonder is attempting to solve this riddle.