The cold wave in Delhi has been so bad that for five days in a row, the national capital has had a lower low temperature than most places in Himachal Pradesh and Uttarakhand. 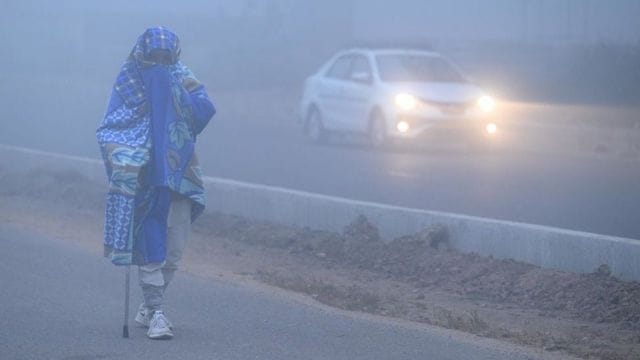 Today was the fifth day in a row that Delhi was hit by a cold wave. Very dense fog cut visibility to just 25 meters, making it hard for road, rail, and air traffic to move, officials said. The cold wave in Delhi has been so bad that for five days in a row, the national capital has had a lower low temperature than most places in Himachal Pradesh and Uttarakhand.

Meteorologists say that the long period of extreme cold was caused by a big space between two western disturbances. This meant that cold winds from the snow-covered mountains blew in for a longer time than usual.

An official from the India Meteorological Department (IMD) said that visibility dropped to 50 meters at the Palam observatory near the IGI Airport and to 25 meters at the Safdarjung observatory and the Ridge weather station.

A railway official said that bad weather caused 267 trains to be late. Officials at the Indira Gandhi International Airport said that the fog caused five flights to be turned around and 30 flights to be delayed. From what the satellites could see, a layer of fog went from Punjab and northwest Rajasthan to Bihar, passing through Haryana, Delhi, and Uttar Pradesh on the way.

The lowest temperatures did go up a little bit in the nation’s capital, though. Delhi’s main weather station, the Safdarjung observatory, recorded a low of 3.8 degrees Celsius, down from 1.9 degrees on Sunday. This is the coldest January day in two years and the second coldest January day since 2013.

Due to the cold weather, the government of Delhi has decided to keep schools closed until January 15. Mahesh Palawat, vice president of meteorology and climate change at Skymet Weather, said that the long cold wave in Delhi was caused by a large gap between two western disturbances. This gap lets the cold northwesterly winds from the mountains stay in the plains for longer than usual.

Most of the time, three or four days pass between western disturbances. Palawat said that this time, the gap grew to seven days. By December 30, a storm from the west had left the area, and the next one came on January 7. A senior meteorologist at IMD said that after two days of back-to-back western disturbances, the weather is likely to get better in the short term.

When a weather system with warm, moist winds from the Middle East, called a “Western disturbance,” moves toward an area, the wind changes direction. So, he said, the cold northwest winds from the mountains will stop for a few days, causing the temperature to rise.

The IMD said that the fog could cause accidents on the roads and told people to drive slowly and turn on their fog lights. It said that there is a chance of power lines getting tripped in places where there is a lot of fog. It said that people with asthma, bronchitis or other lung problems who are exposed to dense fog for a long time may have trouble breathing.

Kartik Aaryan Sings “Ghootne Toot Gaye” While Doing Ice Therapy and Posted a Picture of Himself Pouting on Instagram!!