Global Factory Output Falls Due to a Widespread Slowdown, India Being an Outlier. 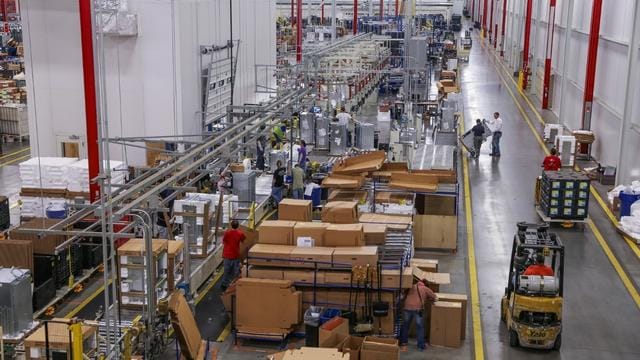 Global inflation has risen as supply chains still recovering from the coronavirus pandemic have been hit by Russia’s invasion of Ukraine, forcing consumers to cut back on purchases.

Last month, manufacturing activity in the United States grew at its slowest rate since the first COVID-19 lockdown in May 2020, as the Federal Reserve’s aggressive push to raise interest rates in order to combat stubbornly high inflation cools demand for goods.

The Institute for Supply Management (ISM) reported on Tuesday that its manufacturing purchasing managers’ index (PMI) fell to 50.2 in October from 50.9 in September. A reading above 50 indicates that manufacturing, which accounts for 11.9% of the US economy, is expanding.

Despite the fact that overall manufacturing activity fell, the ISM survey’s forward-looking new orders sub-index rose to 49.2 last month from 47.1 in September, indicating some resiliency among US consumers despite the Fed’s actions to curb spending.

The final S&P Global UK Manufacturing Purchasing Managers’ Index (PMI) for October dropped to 46.2 from 48.4 in September, falling further below the 50-point threshold that distinguishes growth from contraction.

“The manufacturing sector appears to be on the verge of a recession, according to October’s PMI data,” said Gabriella Dickens, senior UK economist at Pantheon Macroeconomics.

Manufacturing PMIs for the eurozone are due on Wednesday and are expected to show that the ongoing downturn deepened last month as the cost of living crisis kept consumers wary. Meanwhile, in Switzerland, the PMI reading fell by 2.2 points but remained in positive territory at 54.9 points, demonstrating the local economy’s ongoing resilience.

In October, factory activity fell in South Korea, Taiwan, and Malaysia, and expanded at the slowest rate in 21 months in Japan, highlighting the impact of slowing Chinese demand and persistently high import costs.

The Caixin/S&P Global Manufacturing PMI in China rose to 49.2 in October from 48.1 in September. The private sector survey was consistent with an official PMI released on Monday, which revealed that China’s factory activity fell unexpectedly in October.

“Another major risk is the rate at which interest rates in the United States rise. If the Federal Reserve keeps raising interest rates steadily, it could spark capital outflows from Asia and harm exports.” Analysts believe that further interest rate hikes in the United States will force other central banks to act to prevent sharp capital outflows by tightening their own monetary policies, even if it means cooling already soft economies.

The au Jibun Bank Japan Manufacturing PMI fell to 50.7 in October from 50.8 in September, marking the slowest growth since January of last year.

Toyota Motor Corp reported a 25% drop in quarterly profit and lowered its annual output target on Tuesday, highlighting how the pain of rising material costs and supply constraints outweighed the benefit of a weak yen.

Taiwan and Malaysia experienced deeper contractions in manufacturing, while Indonesian activity expanded again in October, albeit at a slower pace than in September. India was an outlier, with factory activity increasing faster in October as demand remained strong.

When Will the IPO of SBI Mutual Fund Occur? Investors Must Read the SBI Chairman’s Important Update