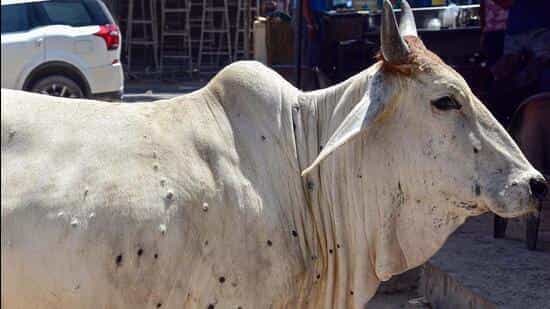 Lumpy virus is continuously spreading in Madhya Pradesh. This disease has also started spreading among the animals in Shivpuri.

As a precautionary measure, the transportation of animals, cattle fairs, and animal markets have been banned in the district.

Animals have been found infected in Sudh, Gangaura, Khajuri and Tigra villages. According to Dr. Girraj Tiwari, Deputy Director, Animal Husbandry Department, the work of vaccination is going on regarding lumpy disease. Symptoms of lumpy skin disease have been found in many animals in these four villages.

Shivpuri administration is on Alert Mode

Here the administration has also taken necessary steps. Collector Akshay Kumar Singh has issued orders. Animals from Other districts and states have been not allowed to enter the district. Here one thousand vaccines are available in the district and till now 300 animals have been vaccinated.

However, The border of Shivpuri district is connected with Rajasthan and Uttar Pradesh.

So far, Rajasthan has got the maximum number of animals suffering from the lumpy virus. Therefore, precaution is being taken in Shivpuri.

The administration has been also working on awareness among Farmers regarding the lumpy virus its effect and safety measures.