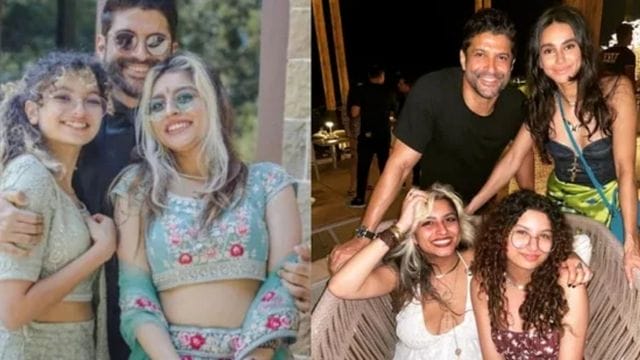 Farhan Akhtar posted a new family portrait with his actress-wife Shibani Dandekar and daughters Shakya Akhtar and Akira Akhtar. The actor-director rang in the new year in Goa with his friends and family, and it looks like his daughters were also present. Farhan’s previous marriage to Adhuna Bhabani produced Shakya and Akira.

Farhan Akhtar shared an unseen photo with Shibani, a reality TV celebrity, as well as Shakya and Akira on Saturday, with a flurry of heart emojis in the description. Both Shakya and Akira are seated on a chair in the photo, while Shibani and Farhan stand behind them, smiling and posing for the camera.

In response to the article, filmmaker Farah Khan and actor Shahana Goswami sent comments with heart emojis. “Heart-touching moment,” a fan said of the family photo. “Awesome family,” wrote another.

Farhan posted a video of his daughter Akira on Instagram last year, captioning it, “You’ve gone a long way @akiraakhtar… keep going… the world is your oyster.” Akira performed Tori Kelly’s song Don’t You Worry ‘Bout A Thing in the video, impressing Farhan’s wife Shibani Dandekar, who is also a singer.

“I don’t have a video of the elder one, sadly, but both of them are really into music,” Farhan said in a 2022 interview when asked how he bonds with his two daughters through music. The older is currently learning to play the guitar. She is a member of this singing organization in the UK, where she is currently studying.”

Farhan and Shibani married on February 19 in a small wedding ceremony at Sukoon, the Khandala farmhouse of Farhan’s father, songwriter Javed Akhtar. Among those in attendance were Zoya Akhtar, Farah Khan, and Hrithik Roshan.

Shibani first met Farhan on the set of the television show I Can Do That in 2015. Farhan hosted the show, and Shibani was a participant. Farhan was married to Adhuna Bhabani at the time, with whom he has two daughters. Farhan and Adhuna divorced after 16 years of marriage in 2016. In 2017, they divorced.

Farhan Akhtar, who directed Dil Chahta Hai, Lakshya, and the Don series, is set to return to the director’s chair with his upcoming film, Jee Le Zaraa. Zoya Akhtar, his sister, wrote the script. In the lead roles are Priyanka Chopra, Katrina Kaif, and Alia Bhatt.