Fans Describe Shehnaaz Gill as “So Cute” When She Yells “Amma, Mama” in Fear While Riding a Camel. Watch the Video!

Shehnaaz Gill put up a video from the past on Instagram. She rode a camel for the Ghani Syaani song shoot. Fans couldn't believe how funny she looked in the clip. 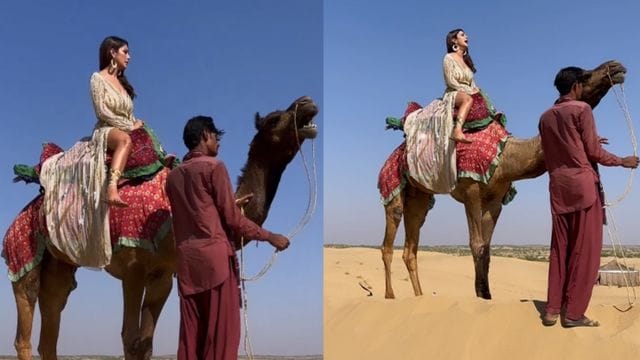 Shehnaaz Gill posted a behind-the-scenes clip from her new song, Ghani Syaani, on Instagram. MC Square, who won MTV Hustle 2.0, also sang on the song. Many of their fans really liked the music video. In the old video, Shehnaaz can be seen sitting on a camel and looking scared. She also yelled “Mama, Amma” (Mom, Mother) as the camel started to groan during her ride. Her fans couldn’t believe how she reacted, so they left messages on her video.

Shehnaaz shared a video of herself from the Ghani Syaani song set in the post. The music video was shot in a desert. She can be seen sitting on a camel in the clip. She wore a stylish off-white dress with glitter on it. As the camel started making loud noises, Shehnaaz could be heard saying, “Mama, Amma” in a scared voice. The camel’s owner took control of it and tried to make it calm down. When the camel started to move backwards, she started yelling, “Mama, mama!” very loudly.

Shehnaaz posted a video of her riding a camel on Instagram and wrote, “If you have life, you have the world. I was so scared.” Yashraj Mukhate, a YouTuber, put down laughing emojis. Pinky, an actor, said, “Camels are big animals, so you need their cooperation to ride them or even just get on one. They also tend to show that they are unhappy. Camels aren’t afraid to say something if they’re not happy. Anyway you look good.”

In response to the video, one of Shehnaaz’s fans wrote, “I would have fallen because of the camel.” Another fan said, “Oh my god, I can’t stop laughing! Sana, you are so cute, sachhi!” “Mother is the only thing we remember when we’re scared,” wrote another fan.

“Shehnaaz and camel both scream, but we don’t know who’s scared of whom,” said another. “Amma,” a fan wrote (laughing emoji). I missed this version of Shehnaaz Gill, lots of love, my baby.”

Shehnaaz rapped in a Haryanvi accent and danced in the Ghani Sayani music video. The song was written by Shehnaaz and MC Square, and Agam Mann and Azeem Mann directed it.

Shehnaaz’s new talk show, Desi Vibes With Shehnaaz Gill, is about famous people. She will make her Bollywood debut in Kisi Ka Bhai Kisi Ki Jaan, a movie by Salman Khan. The movie will come out on Eid, in 2023.

Lenovo Releases Its First 5g Android Tablet in India! Here Are the Price and Specifications!