Since the 1800s, the amount of material from dry landscapes has grown, which could help cool the planet for decades. 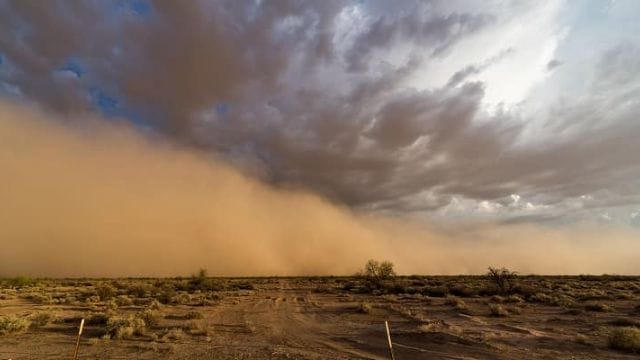 Dust that rises from desert storms and dry areas has been helping to cool the planet for the past few decades, and its presence in the atmosphere may have made it harder to see how much fossil fuel emissions are heating up the planet.

An analysis shows that the amount of dust in the air has gone up by about 55% since the middle of the 1800s. And the growing amount of dust may have covered up as much as 8% of the warming caused by carbon emissions.

The analysis by atmospheric scientists and climate researchers in the US and Europe tries to figure out all the different and complicated ways dust has changed the global climate. They come to the conclusion that, overall, the dust has helped to counteract some of the warming effects of greenhouse gases. The study, which was published in Nature Reviews Earth and Environment, warns that current climate models don’t take the effect of dust in the air into account.

“We’ve known for a long time that greenhouse warming will lead us to a bad place,” said Jasper Kok, an atmospheric physicist at UCLA who led the study. “This research shows that we’ve been putting on the brakes so far.” Scientists think that there are about 26 million tonnes of dust in the air around us. It has many different effects.

Dust and pollution from man-made particles can both cool the Earth in different ways. These mineral particles can reflect sunlight away from Earth and break up high-altitude cirrus clouds that warm the planet. When dust falls into the ocean, it helps tiny plants called phytoplankton to grow. These plants take in carbon dioxide and release oxygen.

Dust can also sometimes warm things up by making snow and ice darker, which makes them absorb more heat. But when researchers added everything up, it was clear that the dust had a cooling effect in general.

Gisela Winckler, a climate scientist at the Lamont-Doherty Earth Observatory at Columbia University, said, “There are a lot of different things that affect the role of mineral dust in our atmosphere.” “This is the first review of its kind that really ties together all these different parts.”

Even though climate models have been pretty good at predicting global warming so far, Winckler said that the review showed that these models haven’t been able to figure out the role of dust very well.

Few records from ice cores, marine sediments, and other places show that dust has also been getting worse since pre-industrial times. This is partly because of how people have changed landscapes through building, farming, and other activities. But it also seems like the amount of dust has been going down since the 1980s.

Winckler said that more research and data are needed to better understand these dust patterns and predict how they will change in the years to come. But if there is less dust in the air, the warming effect of greenhouse gases could happen more quickly.

“Because of this, we might start to warm up faster and faster,” Kok said. “And it’s possible that we’re realising this too late.”

The Ability of Dolphins to Communicate is Negatively Impacted by Noise Pollution, According to a Recent Study!