‘Baahubali’ star Prabhas has always been private about his personal life and has always shied and avoided talking about his love life and relationships.

Film celebrities from the South industry are known to keep their private lives under wraps.

However, several hints about rumored couples have been dropped in various seasons of ‘Koffee With Karan’. These rumors included one that of ‘Baahubali’ co-stars Prabhas and Anushka Shetty dating each other.

As Prabhas’ love life has always been the hot topic of discussion among fans, Karan ceased the moment and asked the Baahubali star if he is currently dating anyone.

Prabhas reply, “No.” When Karan further prodded, “So, the rumours about you dating Anushka Shetty are true or not?” Prabhas replied, “You started them” followed by a burst of laughter.

Prabhas was linked with Anushka many times in the past. The two have a great equation and are very good friends.

In an interview in the past, when Anushka was asked to name any 3 qualities of Prabhas, she responded by saying, “His loyalty towards his friends, he is someone who prefers to grow, and he introspects and grows into himself. His biggest challenge is himself, so he understands and grows that way.”

There have also been rumours of their marriage but both Anushka and Prabhas refuted it from time to time.

Recently, New rumours have been also a hot topic that some reports say that Prabhas is dating his Adipurush co-star Kriti Sanon, however, there is no confirmation on the dating. 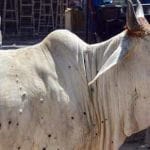