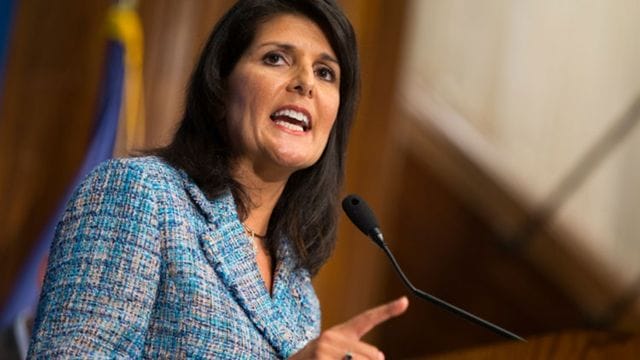 Nikki Haley, the United Nations ambassador under President Donald Trump, announced Tuesday that she will use the Christmas vacation to consider a possible presidential candidacy in 2024, contradicting her vow last year that she would not run if Trump ran again.

“We’re taking the holidays to kind of look at what the situation is,” the former South Carolina governor said at a Turning Point USA event at her alma mater, Clemson University. “If we decide to do it, we’ll give it our all and finish it.”

The words echoed Haley’s remarks at last week’s Republican Jewish Coalition event in Las Vegas, where she was one of ten potential Republican White House candidates to make their case in the GOP’s first major gathering of the 2024 election season.

“I’ve never lost an election, and I’m not going to start now,” Haley declared at Clemson on Tuesday.

However, Haley’s current tone contrasts sharply with her response in April 2021, when she was asked if she would support a future Trump presidential candidacy during a visit to a historically Black university in her home state. Haley also stated that if Trump were to run for president, she would not seek her party’s candidacy.

“I would not run if President Trump ran, and I would talk to him about it,” Haley said when asked if a prospective Trump bid would prevent her own if he announced first. “That’s something we’ll talk about at some point if that decision needs to be taken.”

On Tuesday, Haley’s officials refused to say whether such a conversation had occurred, or what had motivated Haley to change her tone about what 2024 might hold for her now that Trump is firmly in the race.

Haley, who was South Carolina’s governor for six years before Trump asked her to join his Cabinet, served as UN ambassador for two years before resigning on her own accord. In the years afterward, he has made measures that have hinted at a prospective run for higher office, such as returning to South Carolina, forming a political action committee, and releasing a memoir.

Haley has walked a tightrope between criticizing and praising the former president, just like former Vice President Mike Pence and former Secretary of State Mike Pompeo, who are also thinking about running for president.

After the attack on the U.S. Capitol on January 6, 2021, Haley said that Trump was “badly wrong” to rile up the crowd before the riot and that his “actions since Election Day will be judged harshly by history.”

Since then, Haley has talked up the good things that the administration has done. In early 2021, she even defended her former boss by calling him “opinionated.”

A message sent Tuesday to a Trump campaign spokesman asking for a response to Haley’s words was not answered right away. Taylor Budowich, a former Trump spokesman who now works for his super PAC, MAGA Inc., wrote that it was “unfortunate to see politicians who President Trump made relevant use 2024 as life support for their political careers.”