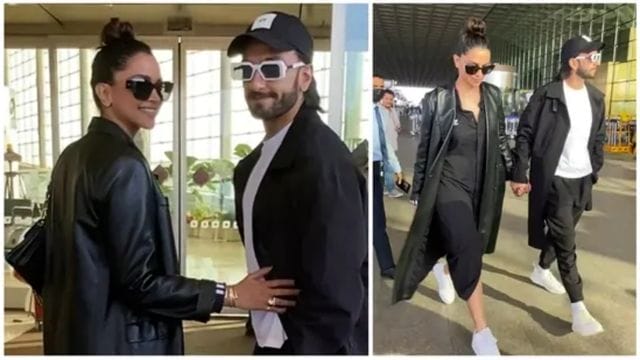 Deepika Padukone and Ranveer Singh made their first public appearance of the year 2023 on Monday morning at the Mumbai airport. Both were dressed in black and walked hand in hand through the airport. While Deepika gave the paparazzi a big smile, Ranveer was his usual quiet self as he posed for the cameras.

A video of the couple from the airport was shared on Instagram by a paparazzo account. It shows Ranveer Singh getting out of the car and walking up to the other side of the gate to open it for Deepika. She was beaming as she walked alongside Ranveer to the entry gate.

“Rare occasion when both of them dress as they did before their marriage,” a fan commented on the video. The couple celebrated Christmas in Alibaug and were seen leaving on a jetty. They appear to have left for their New Year’s vacation now.

Ranveer Singh’s film Cirkus was released on December 23, but neither critics nor audiences were impressed. It was directed by Rohit Shetty and featured a large ensemble cast that included Jacqueline Fernandez and Pooja Hegde. Deepika and Ranveer also performed a dance number in the film titled Current Laga.

This year, Ranveer will appear in Karan Johar’s Rocky aur Rani Ki Prem Kahani alongside Alia Bhatt, Dharmendra, Jaya Bachchan, and Shabana Azmi. It is set to be released in June.

Deepika had a very successful year, having received several international brand endorsements. She also unveiled the FIFA World Cup trophy ahead of the tournament’s conclusion in Qatar. She is currently making headlines for her stunning performance in the song Besharam Rang from her upcoming film Pathaan.

She co-stars with Shah Rukh Khan in the film, which will be released in theatres on January 25. She also has Prabhas’ Project K and Hrithik Roshan’s Fighter.