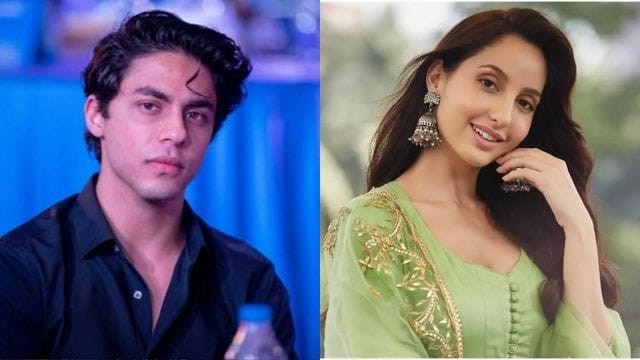 Aryan Khan and Nora Fatehi just got back from Dubai, where they spent the holidays. Some people on social media think that Aryan and Nora from Dubai are dating after seeing photos and videos of them together. Earlier, photos of Nora posing at a Dubai party with Aryan’s sister Suhana Khan and the director Karan Johar were also posted online. Some fans think “there is something serious between Nora and Aryan” after seeing her latest pictures from Dubai.

A Reddit user recently posted pictures of Nora at a party in Dubai that Karan, Suhana, and Aryan Khan also went to. In one of the pictures, Nora was posing with a woman who was later seen posing with Aryan. She was probably at the same party in both pictures because she was wearing the same dress. On another Reddit account, similar videos and photos from the Dubai party were also posted.

A Reddit user said in response to the party pictures of Nora and Aryan and the rumors about their relationship, “This is what I want to happen… If it’s true, I don’t see what all the fuss is about. Nora and Aryan are only five years apart in age, and Aryan is in his mid-20s.” Also, someone wrote, “Got my vote. Nora is way better than any of these young Bollywood actresses.”

In another reply, it said, “Tea… I think it will be pretty cool. I’d pay to see Maheep Kapoor, Ananya Panday, and Bhavana Pandey’s reactions, but where did you get the pictures?” During season 7 of “Coffee With Karan,” Ananya, who has known Aryan since they were kids, said she had a crush on him. On the Netflix show Fabulous Lives of Bollywood Wives, her mom Bhavana can be seen with Maheep.

Aryan Khan is the son of Shah Rukh Khan and Gauri Khan. He just finished his first project with Red Chillies Entertainment and is now running his own business. In a post on Instagram in December, Aryan said that he was starting a brand called “lifestyle luxury collective.”

In Thank God, 2022, Nora had a small role in the song “Manike” with Sidharth Malhotra. Ajay Devgn was also in the movie. She was also in the remix of Jehda Nasha from the movie An Action Hero with Ayushmann Khurrana. Nora will be in the upcoming movie 100 Percent with John Abraham and Shehnaaz Gill.

Black Panther: Wakanda Forever OTT Release Date: Check Out When It Will Be Released On Disney+!!