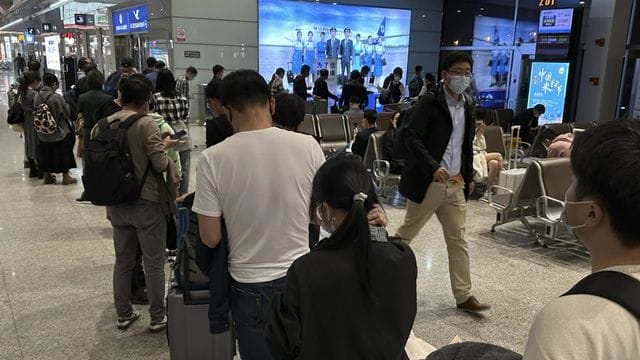 Beijing has criticised the new testing rules for Chinese travellers and threatened to take action against the countries involved. After suddenly removing restrictions that had been in place for most of the pandemic, China is now facing a nationwide outbreak of the coronavirus.

Countries like the US, UK, India, Japan, and several European countries have said they will make it harder for people to travel from China. This is because there isn’t enough information about infections and people are worried that new strains may appear.

Mao Ning, a spokesperson for the foreign ministry, said at a briefing, “We believe that the entry restrictions adopted by some countries targeting China lack scientific basis, and some excessive practises are even more unacceptable,”

“We will take countermeasures based on the principle of reciprocity if anyone tries to use the COVID measures for political purposes,” they said.

The comments were the strongest ones China has made about the issue so far. This week, Australia and Canada joined a growing list of countries that require travellers from China to take a Covid test before boarding a flight.

Several countries, including the US, backed the Covid tests.

When asked about what his Chinese counterpart said, US State Department spokesman Ned Price told reporters, “This is a method that is based on science and science alone.”

Price said that the measures are based on “very public health concerns” because of “the surge of Covid-19 cases in the PRC and the lack of adequate and transparent epidemiological and viral genomic sequence data being reported from the PRC.” The PRC is the People’s Republic of China.

Price said again that the US was ready to give China its Covid vaccines. China has been heavily promoting its own vaccines around the world, even though experts say they are less effective.

Élisabeth Borne, the prime minister of France, also defended travel rules. Starting on Wednesday, anyone flying from China to France will have to show proof of a virus test that came back negative within the last 48 hours, and random tests will be done when they arrive. She told France-Info radio, “We are doing our job, and my government is doing its job, which is to protect the French.”

Australia said it wouldn’t be swayed by China’s threat of retaliation. Treasurer Jim Chalmers told ABC that “countries will make their own decisions about travel arrangements and how they manage Covid more generally.” He said that the need for a Covid test before a flight wasn’t “especially hard” and was “in line with what other countries are doing.”

When asked if the requirement was a way to put pressure on China, Chalmers said, “I don’t see it exactly that way, but there is a lot of concern in the global health community about the transparency and quality of data we see from China on Covid.”

Officials from the World Health Organization (WHO) met with Chinese scientists on Tuesday because they were worried about the accuracy of China’s data on how the outbreak spread and changed. The UN agency had asked the scientists to share information about hospitalisations, deaths, and vaccinations, as well as give detailed information about how viruses are put together.

A spokesperson said that the agency was looking forward to a “detailed discussion” about variants that are circulating in China and around the world. New Zealand went against the general trend and said on Wednesday that travellers from China would not have to show a negative Covid test.

During most of the pandemic, China used a “zero-Covid” strategy to try to get rid of the virus by putting in place strict rules. In December, China suddenly loosened these rules. Before January 8, Chinese officials said that visitors would no longer have to stay in quarantine when they came to China. This would make it easier for Chinese people to travel.