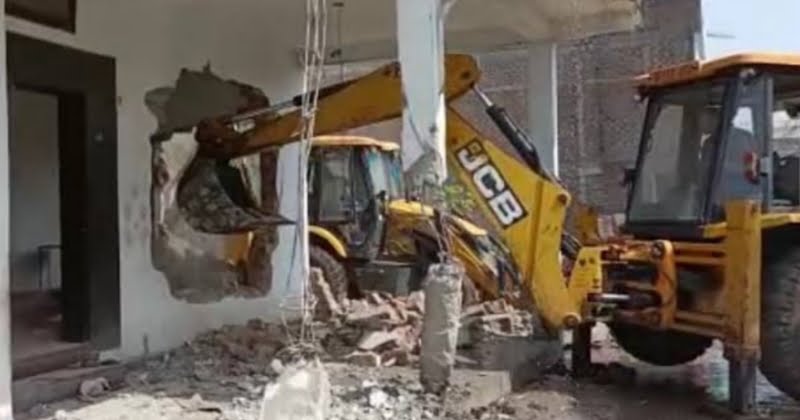 Bulldozers have been a topic of discussion in the city ever since the Yogi Adityanath government came to power in Uttar Pradesh. Bulldozers are running on the property of criminals and mafia. Now the house of Javed Ahmed alias Javed Pump, the so-called mastermind of the recent violence in Prayagraj, has also been bulldozed. Questions are being raised about this action. Javed’s family has accused the administration of taking illegal action.

Javed Ahmed’s wife Parveen Fatima had filed a petition in the Allahabad High Court. and claimed that the house that was demolished by the government was in his name and that the Prayagraj Development Authority (PDA) action was illegal. He also said in the application that Javed does not have a house. They were served a notice and the administration illegally demolished the building. At the same time, the PDA says that the house was built illegally without passing the map, so on 10 May 2022, Javed was also given a notice to present his side. For this, the date of 24 May 2022 was fixed. According to the PDA, when neither Javed nor his lawyer reached on the due date. After this, orders were given to demolish the building. June 12 was set as the date for the demolition.

After this case the question is whether the administration can demolish a building like this? If so, under what law can he do so? How to find out if a building is illegal?

The Urban Planning and Development Act 1973 is in force in Uttar Pradesh. The law says which house can be demolished or demolished? What is the procedure before demolition of the house? What can a person whose house is being demolished do? All this is stated in Article 27 of this Act.

Article 27 states that if any building or development work is done in contravention of the master plan without permission or in violation of any condition, the administration may order its demolition or removal.

How will this work? It will happen that if the administration bulldozer demolishes the building, if some part of it has been removed or excavated etc., if it is not re-filled, the job seeker will remove it himself.

Once the demolition order is passed, the operation should be completed within 15 to 40 days. The law also stipulates that the cost of the entire proceeding shall be borne by the employer or the employer. This recovery cannot be challenged in any civil court.

No action can be unilateral. If an order for demolition of any building or development work is passed, notice is given to the owner or the person doing the work.

The owner of the property can appeal to the Chairperson of the Authority within 30 days from the date of the order. It can amend or annul the order of the Speaker after hearing. In any case the decision of the Chairman shall be final. The decision of the President cannot be challenged in any court.

In 1999 in Saidan Singh vs NDMC case, the Supreme Court held that every person has a right to do business under Article 19(1)(g) of the Constitution and street hawkers are also subject to it. The court said that it is the right of every citizen to use the road. The court said that the administration can allow hackers to walk on the side of the road. However, the court also clarified that hawkers cannot be allowed to sit on every road or footpath. After this decision, the North Delhi Municipal Corporation made rules for Tehbazar license.

In August 2020, the Supreme Court ordered the removal of over 48,000 slums built on railway land in Delhi NCR. However, it was clarified that unless arrangements are made for the slum dwellers, the slums cannot be removed.