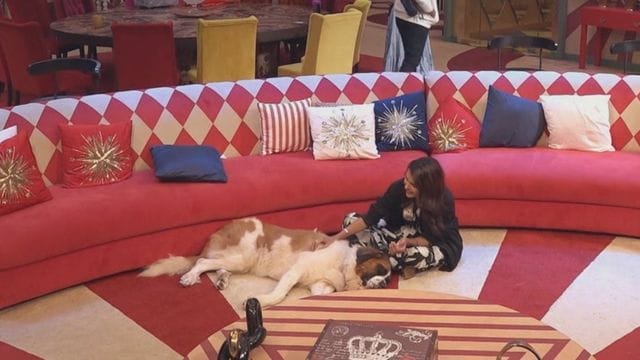 Shaleen Bhanot, Abdu Rozik, and Archana Gautam all had something to say after Bigg Boss brought Maheen, a dog, into the controversial house.

In the next episode, Bigg Boss will give each of the contestants a special gift. On Monday, a dog named Maheen will appear on Salman Khan’s show. A preview of this has been posted on Instagram by the Colors page.

In the clip, Bigg Boss says that all of the housemates will get things they missed this week. The taskmaster then asks if anyone misses their families, and everyone raises their hands. BB says that this is not the week for families.

Ankit Gupta has been kicked out of the controversial house, in case you didn’t know. When Priyanka Choudhary heard that Ankit was going to be voted out this time, she was crushed.

Dolly Bindra wrote on Twitter after Ankit Gupta was kicked off, “The best person has been eliminated this is so not good #ankitgupta #biggboss16 @ColorsTV @BiggBoss.” People on the Internet responded to her tweet. One person said, “BB is a show for their work. No one could force anyone for involvement.

But BB had to do that all the time for AnkiGupta, so I don’t know how it will work. Yes, he is a very good person, of course. But vo show or platform ko value do apko pay back bhi mil raha hai uske liye, that’s it.”

The second one said, “Yes, very true.. Bigg Boss is nxt lvl of biassed this time..so frustrating.” “Yes!” said the third one. Why not give the public the option with the public? How do they know how much they are contributing? We can judge thatbetter  BRING BACK ANKIT IN BB16 STAY STRONG PRIYANKA.”

The fourth one said, “Thank you so much, mam, for this tweet. In fact, the best person for a show with so much bias.” The fifth one said, “Yes, this show is all about personalities, and I’ve never seen a better and more real personality than his BRING BACK ANKIT IN BB16.”

Ankit said that his trip was “satisfying” after he had been in the house for 85 days. He also said, “After 12 weeks in the house, I think it’s an accomplishment for a person like me to have stayed in the house for that long.” Ankit said this about his eviction: “I was surprised and even shocked by the fact that I had to move out.

Most of the time, the audience decides what happens, but this time, the contestants got to decide. But when Bigg Boss said that there would be a twist, I knew that the housemates would choose me.”