Bigg Boss 16: Salman Khan Teaching Archana a Lesson and Telling Her That She Has Come in “Khairaat”!! 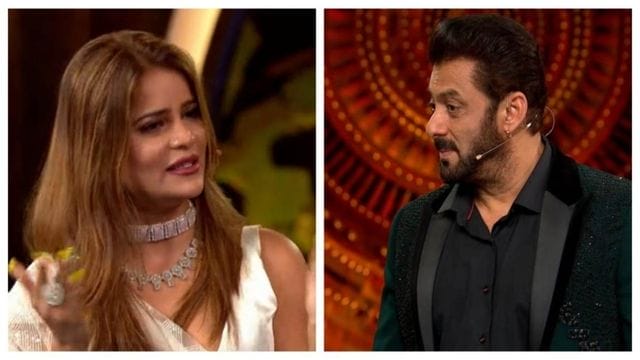 Salman Khan came to Bigg Boss 16 on Friday night for the Shukravaar Ka Vaar episode, which was a weekend special. He told Tina Datta how to act with Shalin Bhanot, and he and other housemates also said that their relationship was fake.

In tonight’s episode, it will be interesting to see Salman talk about a big fight between MC Stan and Archana Gautam. In a new promo, we see the actor from Barjrangi Bhaijaan giving Archana a lesson and telling her that she has come in ‘Khairaat.’

Archana recently told MC Stand that he only stayed in Bigg Boss because viewers gave him money. She called him Bigg Boss’s servant. MC Stan replied, “Tere baap ka naukar hai kya?” (Am I your father’s servant?) She also said something about her mother.

In the episode promo, an angry Salman Khan tells MC Stan, “Maa-Baap ke upar jaane ka matlab kya hai yaar (What is the point of dragging someone’s mom and dad?).” He asks MC Stan to judge him and tell him if he did the right thing or not. The rapper apologises, “Woh jo baat kara, woh gandi baat kara maine (What I said was wrong).”

Salman moves to Archana after MC Stan. He tells her, “Archana aapne kaha na khayraat me aya hai. Agar iss ghar me koi khayraat me aya hai na toh woh Archana hai(Archana, you told him that he came because the viewers gave him money. If anyone could have come here because of money, it’s you).”

The contestants who are up for elimination this week are Tina Dutta, Sajid Khan, Shalin Bhanot, Soundarya Sharma, Archana Gautam, Sreejita De, and Sumbul Touqeer Khan. In tonight’s episode of Big Brother 16, it will be interesting to see who leaves.

Akela Cooper, the Film’s Writer, Has Been Hinting About an Unrated, “Way Gorier” Version of M3GAN!!

Shark Tank India Season 2: People Are Making Memes Related to the Judges! Here Are Some Memes!!