Salman Khan calls Tina Datta out in front of the other housemates for making questionable claims about Shalin Bhanot. The actress starts crying and begging to be let off the show. 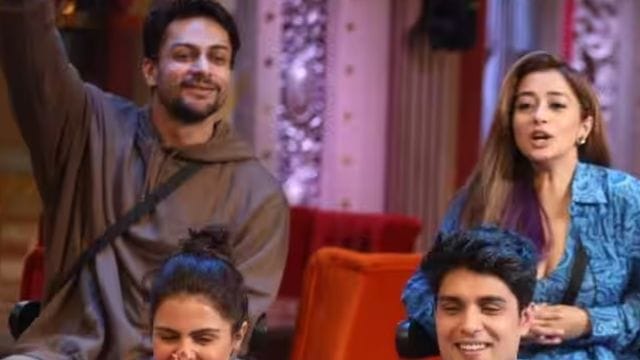 She said that Shalin was eager to meet her and work together before they went into the house. She also said that the actor had asked her for something “cheap.” Now, in the latest promo for Salman Khan’s Weekend ka Vaar episode, the host and actor confront Tina for talking badly about Shalin with Priyanka Chahar Choudhary.

Salman used these exact words when he spoke in Hindi: “Shalin had asked me for cheap things before he came into the house. You kept all of this to yourself for 15 weeks until things were going well with Shalin. Now that things aren’t going well, you’re telling everyone about it.”

Tina denies it, saying “aisa nahi tha sir,” Salman says, “Aur koi limit rakhi, koi limit rakhi aapne?” Tina is hurt by this, and she can’t stop crying. Tina tries to calm down Priyanka, but Priyanka says, “I want to go home because I’m tired, sir. Everything bad has been put on me, and I’ve been blamed for everything.” She’s done explaining and clearing things up for everyone over the past three weeks. She can’t take any more of this. She tries to get Salman to let her leave on her own.

Tina set a fake narrative of #ShalinBhanot & #SumbulTouqeerKhan, Sumbul was begging & crying in front of Salman..

KARMA hit Tina badly because of her habit of Character assassination & when #SalmanKhan exposed her, she is crying for fake Sympathy & Woman card🤣#BiggBoss16 #BB16 pic.twitter.com/jvITsEd63v

Tina had earlier told Priyanka Chahar Choudhary some shocking things about the outside world. The two didn’t get along with Shalin Bhanot, but they told him a big secret about him. It was from when he found out Tina was running for Big Brother 16.

Tina tells Priyanka, “Do you know why Shalin tries to shut me up? It’s funny.” When he found out I was on the show and that we had friends in common, he was excited. Before coming here, Shain called a friend we both knew and asked him to set up a meeting with me. Shalin said that he wants to work as a group. There are reasons why he can’t change his mind. Outside, he also met Gautam. How did they become so close that they called each other “brother” from the first day?

“I didn’t want to meet him because I wanted to start out fresh here. He was desperate to meet me. Besides Sreejita, I didn’t know anyone else. He was making plans from the outside, so how am I using him, you dumbass?” she asked. Tina also told everyone that Shalin had asked her for “something very cheap.” “Priyanka, I know this will disgust you. He asked for something that didn’t cost much. It’s selfish, but I can’t say it inside. I didn’t want to bring it up, so I told him I don’t like talks like that.”

Nahi bolungi bolungi bolke bahat kuch bol diya.
.
Tina and Priyanka think we are fools here and that we are not understanding what they meant in their conversation.
.
Very very cheap comment on #ShalinBhanot
.#Biggboss16 #Biggboss#BB16 pic.twitter.com/xybl9SpGJl