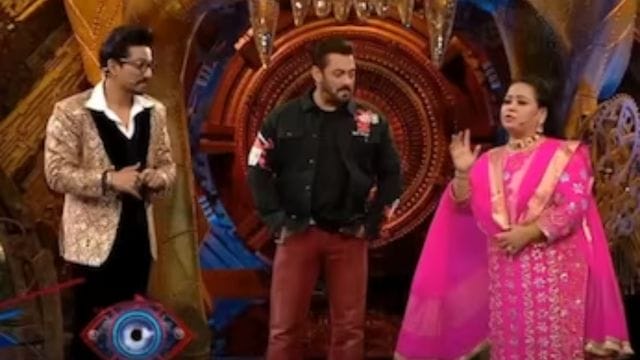 Bigg Boss 16 will show Bharti Singh and her anchor husband, Haarsh Limbachiyaa. ColorsTV posted a preview video for the most recent episode, in which both of them can be seen making fun of the Bigg Boss housemates. Bharti made fun of Abdu Rozik and Sajid Khan. She called Sajid “Abdu’s mother,” which was a joke.

She also remade the whole scene from the most recent episode of Family, in which Tina Datta’s mom hugged Sreejita De because she thought Sreejita was Tina’s daughter. Bharti hugged Archana Gautam instead of Tina Datta to make the scene work. This made people laugh out loud. Fans had a lot to say about the video promoting Friday’s episode.

In the beginning of the promo, Bharti and Harsh were making jokes in the garden while the other housemates watched. Bharti can be heard saying, “Ek hafta puri janta confuse rahi ki Sajid bhai Abdu ki mummy hai! ye phla bachha dekja jo maa ko lori gajr sunata h. Everyone thought Sajid Khan was Abdu’s mom for almost a week. This was the first child who sang lullabies to his mother. Everyone in the house started laughing out loud.

Bharti went on to say, “Tina,” Tina is the only person I’ve known for a very long time. Haarsh said right away, “Give her a hug!” Bharti ran up to Archana Gautam and gave her a hug instead of Tina. Tina did stand up to get a hug, but she was shocked when Bharti didn’t give her one.

Bharti said, “Jab paida ki hoyi maa galati kar sakti hai, toh mai kyu nhi kar sakti (When a mother can commit a mistake who has given birth to her daughter, then why cannot I?)” When she said this, the other people in the house stood up and gave her a standing ovation. Everyone laughed.

When someone saw the video, they wrote, “Love you, Bharti and Harsh… iss baar maza aayega BB dekhne.. (This time, it would be fun to watch Bigg Boss.)” Another fan wrote, “Sahi Kaha Bharti ji, paida ki hui maa galti kar sakti hai toh fir (Very well said Bharti, when a mother can make a mistake, then..), entertainment queen in Bigg Boss house.” Another fan wrote, “Bharti and Harsh are my favourites.”

Get more updates from Bollywood, Hollywood and TV Show along with latest entertainment news.