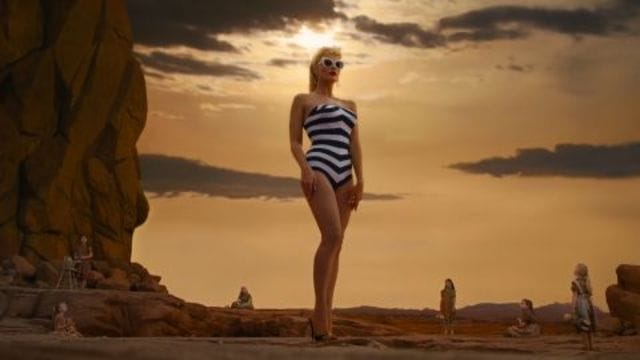 Greta Gerwig’s Barbie movie, starring Margot Robbie, is planned to be released on July 21, 2023, despite appearing too insane even for this crazy, crazy world. Many people have pondered what a live-action film based on the legendary toy might be like, and a recent video provides us with a little peek. The actual star of this teaser clip, however, is Margot Robbie flaunting her legs in a stunning swimsuit!

While the trailer eventually shows us Barbie’s kaleidoscopic universe, it opens as a strange parody of 2001: A Space Odyssey. We see youngsters playing with dolls, but as the narrator explains, they are dissatisfied because they are only baby dolls. Margot Robbie as Barbie then towers over these children, demonstrating how amazing a doll based on an actual woman can be.

Surprisingly, Margot Robbie’s first appearance as Barbie is in a vintage striped swimsuit. Fans are obsessed with Robbie’s legs, which, to be fair, are rather spectacular. Classic Barbie enthusiasts, on the other hand, are ecstatic for a different reason: Robbie is wearing the same striped swimsuit that Mattel’s first Barbie ever wore.

The Margot Robbie Barbie seen at the beginning of this trailer appears to be different from the one seen throughout the film. Later in the trailer, for example, we don’t see Barbie towering over anyone else like the 50-foot woman. Instead, the teaser trailer stresses Barbie’s enormous cultural reach, right down to tiny girls destroying or discarding their previous toys in favor of this new one.

Only in the final 10 seconds of the teaser trailer do we catch a peek at the film’s actual world. First, we see Margot Robbie as Barbie waving imperiously to an entire neighborhood of pink fantasy homes. Following that, we see a blonde Ryan Gosling and his friends competing in some type of sporting event before switching to characters cheering and dancing in various locales.

Not long ago, movies like this were either mindless toy ads for youngsters or lukewarm nostalgia fests for their parents. But, with director Greta Gerwig (Lady Bird, Little Women) at the helm and a scenario co-written by Gerwig and Marriage Story filmmaker Noah Baumbach (who is also Gerwig’s boyfriend), this Margot Robbie Barbie film appears to be a pleasant surprise.

It may even be an indication that Mattel plans to revive interest in their legendary toy, despite recent efforts to revive other old toy lines such as He-Man and G.I. Joe.

Even if Barbie is a huge bomb, Margot Robbie is likely to come out on top. While she has had tremendous success as an actor, she has been creatively linked to DC films for quite some time.

And, while she appears to be safe for the time being from James Gunn shaking things up, Henry Cavill’s recent struggles may have taught her a vital lesson: don’t put all your eggs in one basket, especially if that basket is owned by Warner Bros!