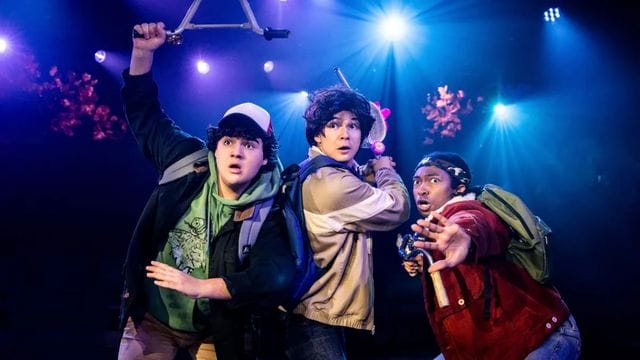 Demogorgon in Motion! The Hawkins gang saunters through an off-Broadway parody of the Netflix horror series. Hawkins, Indiana, may be home to murderous monsters, but it’s far less frightening when campy musical numbers and silly wigs are thrown in.

Stranger Sings The Parody Musical, which bills itself as a “hilarious ‘upside down’ take” on the hit Netflix horror drama about young friends facing supernatural forces in a fictional ’80s town, has plenty of both. It is currently playing off-Broadway in New York and will be in London until January 1. The show will be in Melbourne, Australia, in November, with additional Australian cities to follow.

Stranger Sings writer and producer Jonathan Hogue says the series begged for musical satire with its colorful cast of ragtag characters, big ’80s hair, and bulky portable phones that could double as doorstops.

“When I started exploring this series as a parody musical, the songs and story beat all fell into place so naturally, as if the show was meant to be musicalized, and parodied, from the beginning,” says Hogue, who is a big fan of the Duffer brothers’ creation, which finished its fourth season in August.

“Who doesn’t want to see Joyce transform into a big brassy showstopper with her Christmas lights, or Barb transforms into a vengeful musical diva?”

Mike, Lucas, Dustin, Will, Eleven Hopper, Steve, and Jonathan are also present for the musical version. Stranger Sings continues the story arc from Season 1, which explains the reappearance of poor, ill-fated Barb, alive and singing duets with questionable bestie Nancy.

They sing with a knowing wink, “We’ll stick together, friends forever, and best friends never, they never die.”

The two-hour show includes 14 songs about life in Hawkins, awkward teen crushes, and the stress of having your child kidnapped and transported to another dimension. Some of the more amusing lyrics come from a song in which psychic kid Eleven sings about the shady Hawkins National Laboratory scientist Dr. Brenner. Her father figure does some very unpaternal things, such as putting Eleven in a sensory deprivation tank to use her telekinetic abilities for government evil.

Eleven sings, “I always wanted a dad who would never make me cry.” “One who would say to me, ‘Kid, I’m so proud of you,’ rather than ‘Stay in your cell until July.'”

A post shared by Stranger Sings! The Parody Musical (@strangersingsmusical)

“I got a lot of ideas from watching and listening to classic ’80s films and music, but I also carried a lot of inspiration over from my lifelong obsession with Saturday Night Live, Mel Brooks, Monty Python, and other sketch comedy creators,” says Hogue, who is studying theatre management and producing at Columbia University in New York.

“It was also important to me that, while the show remained funny throughout, I also made sure to infuse it with just the right amount of heart so that audiences really cared about these characters, no matter how silly they are.”

Hogue has seen all four seasons of the Netflix show, met the cast and even appeared in a few episodes as an extra. He claims that audiences can enjoy the music even if they’ve never heard of Madmax or the Mind Flayer or tweeted with the hashtag #justiceforbarb.

“One of my favourite things to hear… is audience members saying, ‘I’ve never seen an episode of Stranger Things and I loved this show,'” says Hogue.

Stranger Things hasn’t been set to music for the first time. Five years ago, singer Brian David Gilbert released a comedic musical backing track to replace the regular audio track from the first season. The album is also titled Stranger Sings, but it is unrelated to the musical.

Stranger Things’ fifth and final season is set to premiere on Netflix in 2024. The Duffer brothers have confirmed a time jump for Season 5, but no details have been revealed.

In the meantime, perhaps a hip-thrusting Demogorgon in a tight body suit will suffice.