Bachchan Family Returning Home From the Airport, and Aishwarya Rai and Her Daughter Are All Smiles as They Converse and Walk Hand in Hand 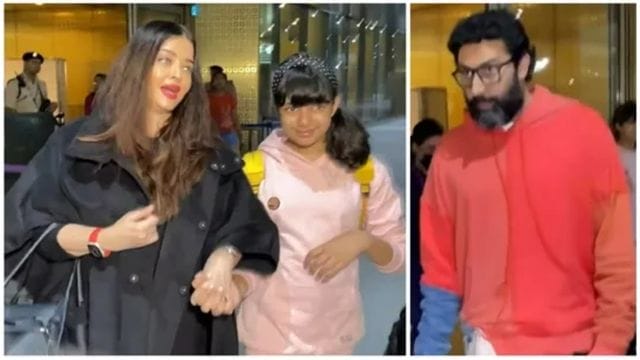 From their New Year’s getaway, Aishwarya Rai, Abhishek Bachchan, and their daughter Aaradhya Bachchan have returned home. The three members of the family were observed at the Mumbai airport early on Tuesday morning. Aishwarya took Aaradhya’s hand, as she always does, as they headed to the car. As some online trolls questioned her habit of always holding Aaradhya’s hand at airports, her supporters rushed to her defense.

Aishwarya wore her standard black casuals and undone hair as she left the house with Aaradhya, who wore a pink hoodie and black track trousers. There was a happy scene of the mother and daughter speaking together. Before stepping into her car, Aishwarya did give a final wave to the cameras.

The Bachchans’ constant handholding has been called into question after a paparazzo account posted a video of them at the airport. There were plenty of people who felt compelled to defend her.

Defending her motherly instincts, one supporter remarked, “To individuals posting and complaining about the holding hands of her kid should realize that she is simply being protective towards her and every mother on this earth has that affection & feeling towards her child!” That’s a load of… Don’t be rude to her since she’s famous!

Someone else chimed in, “Of course she’s going to hold her daughter’s hand..a couple of years ago her mum fell due to the haste to snap photographs of her family..don’t judge.”

Previously, Abhishek Bachchan had been seen in the second season of the horror online series Breathe: Into the Shadows. In addition, one of his movies, Dasvi, was recently released on Netflix. His next project is R Balki’s Ghoomer, which also features his superstar father, Amitabh Bachchan.

Did You Adore Kareena Kapoor’s Sequined New Year’s Eve Gown, Which She Wore to Celebrate With Saif Ali Khan, Taimur, and Jeh? Valued at 2 Lakh Rupees!!