Athiya Shetty, an Actor, and Kl Rahul, a Cricketer, Wed After Dating for Many Years and Successfully Concealing Their Relationship 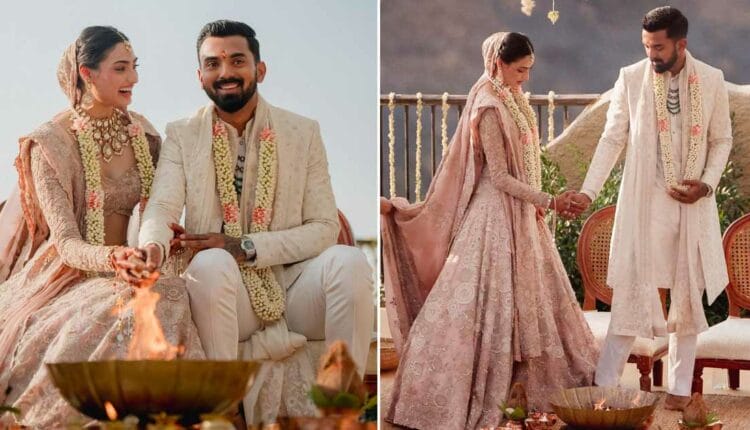 Athiya Shetty, an actor, and KL Rahul, a cricketer, wed after dating for many years and successfully concealing their relationship. On Monday, the pair wed in a small ceremony at Suniel Shetty, the actor, and Athiya’s father, in his farmhouse in Khandala.

On Saturday, the wedding festivities started when images and videos of the farmhouse’s decorations started to circulate on social media. The family had a sangeet ceremony and cocktail party on Sunday night, and their relatives and close friends came.

Videos captured the ceremony, which featured party tunes like “Besharam Rang” and “Dil Mein Baji Guitar,” being played in a decked-out, gorgeously lit-up mansion. There will reportedly be a “no phone policy” during the wedding of KL Rahul and Athiya Shetty, with the estimated 100 guests being asked not to upload any pictures or videos online.

Aaj Ki Party, Humma Humma, and Besharam Rang are played during the sangeet during the Athiya Shetty and KL Rahul wedding. A new rumor about the couple’s union appeared in the media every six months for a long period of time leading up to their wedding. Even Suniel Shetty had constantly refuted the rumors, while Athiya and KL Rahul kept silent. However, everything changed on Sunday.

Suniel ultimately announced the couple’s impending nuptials, the first-ever public confirmation, when the paparazzi set up shop outside the wedding venue. The actor gave them his word that Athiya Shetty and KL Rahul will pose for photos with each other after their wedding for the media.

I’ll be there tomorrow with the kids, “Main kal bachhon ko leke aata hoon.” Then he announced in Marathi that he would gather the whole family so that the paparazzi could take pictures. Suniel praised them for their affection and saw to it that the right preparations were made for them.

According to reports, close friends of Suniel Shetty from the Hindi cinema business, such as superstar Salman Khan, Jackie Shroff, and Akshay Kumar, have been asked to attend the wedding. Actor Akanksha Ranjan Kapoor, who is rumored to be close with the bride, is also expected to attend.

Who is Shawn Johnson? Is She Still Alive?| Death Rumors

Is EDP445 Still Alive? Why He Was Banned From Social Media?

Is Tracy Brown Bering Still Alive? What Happened to Her?