So far, Rahul Gandhi has travelled 3,400 km and been on the road for 125 days. During this time, people have been interested in and even admired how little he wears, while opposition parties have made fun of him. 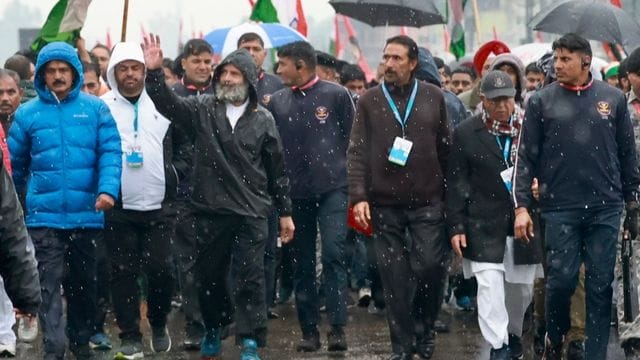 Rahul Gandhi, a member of the Congress party, is leading a walk across India called “Bharat Jodo Yatra.” On Thursday, he went from Punjab to Jammu for the last part of his walk. Mr. Gandhi marched through north India in the middle of winter while only wearing a t-shirt. Today was the first time that a jacket was seen on him. People say that Mr. Gandhi finally put on rain gear because it had been drizzling in parts of Jammu since morning. Later, he was seen taking off the jacket and walking around in his usual white t-shirt.

So far, Rahul Gandhi has traveled 3,400 km and been on the road for 125 days. During this time, people have been interested in and even admired how little he is wearing, while opposition parties have made fun of him. He said he would put on more clothes if he got cold, but that hasn’t happened yet.

On January 25, the 52-year-old Congress leader will raise the national flag in Banihal, which is in the Ramban district of Jammu and Kashmir. On January 27, he will go through Anantnag to get to Srinagar.

The yatra started again this morning from Kathua’s Hatli Morh. Police and paramilitary forces have set up a huge security perimeter around the Gandhi scion and his fellow travellers. Also, jammers have been set up. Security services had told Mr. Gandhi before the Bharat Jodo Yatra in Kashmir that he shouldn’t walk along certain stretches.

As he came into Jammu, he was given a big welcome. Farooq Abdullah, the president of the National Conference and a top Kashmiri leader, travelled to Lakhanpur to meet him. Mr. Gandhi talked about his Kashmiri ancestry to connect with the people. He talked about the people of the old state’s “pain and suffering.”

Rahul Gandhi was given a big welcome in Madhopur, Punjab, which is near the border with the Kathua district of Jammu and Kashmir. There was singing and dancing. Hundreds of people came out to welcome the yatra, which is now on its last leg and will end on January 30 with a big celebration in Srinagar.

Chadwal is where the yatra will stop for the night. Tomorrow morning, it will leave Hiranagar and go to Duggar Haveli. On January 22, it will go from Vijaypur to Satwari.

Stay tuned to New Times Of India for more National News and bookmark our website so that you can’t miss any updates.

A Massive COVID-19 Epidemic in China Has Put a Strain on the Country’s Healthcare System!