Kangana Ranaut shared some photos from the set of her upcoming movie Emergency as filming came to an end. She also said that she had to put all of her property on the line for the movie and that she got dengue during the first schedule of filming. 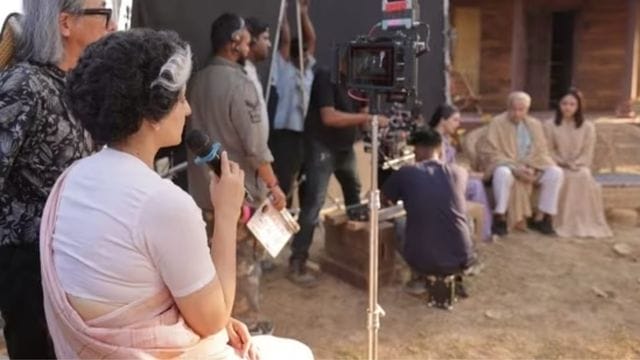 Kangana Ranaut finished filming her next movie, Emergency and then posted some pictures from the sets on Instagram. The actor-director wrote in her post that she had to take out a second mortgage on her house to pay for making the movie. Kangana will play the role of the late Prime Minister Indira Gandhi in the movie Emergency.

Kangana posted three pictures from the set, in which she is dressed as the late Indira Gandhi and speaking into a microphone while sitting behind the camera. In the caption, she said that she had to put all of her property on the line to finish the film. She also said that she got dengue on the first day of filming. Kangana thanked the crew in the post and told her fans that she is now in a “safe place” and that they shouldn’t worry about her.

Kangana wrote, “Today, as an actor, I’m putting the finishing touches on Emergency. This marks the end of a very happy time in my life.” It might look like I breezed through it, but that’s not true… From mortgaging all of my properties and everything I owned to getting dengue during the first schedule and having to film even though my blood cell count was dangerously low, my character has been put to the test… I’ve been very honest about how I feel on social media, but I didn’t share all of this because I didn’t want people who cared to worry unnecessarily, and I didn’t want to give people who want me to fail and are doing everything they can to make me suffer the pleasure of my pain.

The actor, who is also directing Emergency, added, “At the same time, I want to tell you all that if you think working hard for your dreams or what you want is enough, you should think again because that’s not true… You have to work hard, that’s a given. Even if you deserve it, you’ll be pushed to your limits, and you can’t give up. Don’t let go of yourself until you can… You’re lucky if life doesn’t kill you, but you’re lucky if it does. If you break and fall apart… It’s time for you to start over, so have a party… It’s like a new start for me, and I’ve never felt more alive. Thanks to my very talented team, I was able to do it… PS: Please let everyone who cares about me know that I am safe now… I wouldn’t have told you all this if I… please don’t worry, all I need is your love and blessings.”

Kangana said that her movie Emergency will come out in 2021. It was written by Ritesh Shah, who also wrote Kangana’s last movie, Dhaakad, which didn’t do well at the theatres. In addition to Kangana, the film will feature Anupam Kher, Milind Soman, Mahima Chaudhry, Satish Kaushik, and Shreyas Talpade in important roles. Emergency has been in the works since June of this year. In Assam, where the film was shot, the crew just finished up their work.

Stay tuned to New Times Of India for latest news and bookmark our website so that you can’t miss any updates.